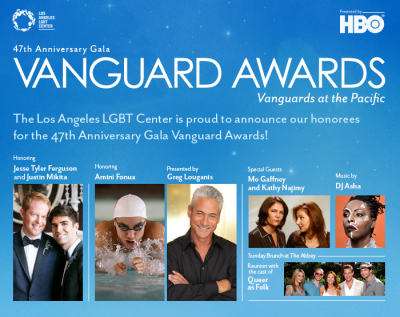 Modern Family star Jesse Tyler Ferguson and husband Jason Mikita are going to have a big night out on September 24.

It was announced on Wednesday that the high-profile couple will be honored by the Los Angeles LGBT Center at its 47th Anniversary Gala Vanguard Awards.

Ferguson is a five-time Emmy nominee for his role as Mitch on ABC’s Modern Family which begins its eighth season this fall.

He and Mikita were married in New York City in 2013 after two years as a couple.

A year before their marriage they founded the organization Tie the Knot to help benefit organizations throughout the world that support equality. The money is raised through the sale of limited-edition bow ties and has raised more than $500,000 to date.

Ferguson told me in 2014 that he remains positive about LGBT equality even when there are legal setbacks and pushback from opponents.

Mikita was is one of the top 50 fundraisers on this year’s AIDS/LifeCycle benefit for the Center and SF AIDS Foundation. He is co-founder of bedding company Thread Experiment, which donates high-quality linens for the homeless youth who sleep on the Center’s 50 beds.

In addition to Ferguson and Mikita, openly gay Olympian Amini Fonua will be honored with an award presented by Olympic diving great Greg Louganis.

Fonua is the first swimmer from Tonga to ever win a gold medal in international competition. He did so representing a country where it is technically illegal to be gay.