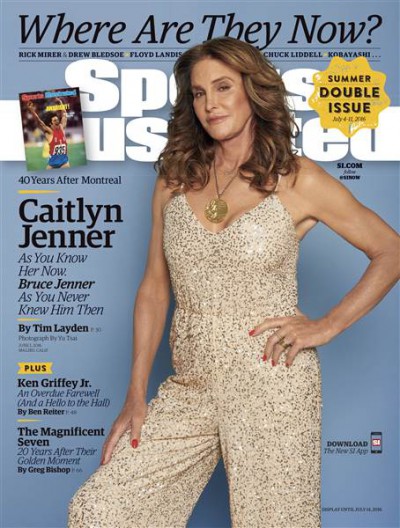 It was back in 1976 that an Olympic gold medalist named Bruce Jenner appeared on the cover of Sports Illustrated magazine.

He was wearing a gold medal won at the Summer Olympics that year in the decathlon.

Forty years later, Jenner and the medal re-appear on the SI cover.

So much has happened from a Wheaties box to acting in TV and films to becoming a reality show star in Keeping Up With the Kardashians.

But most importantly, Bruce transitioned to Caitlyn with the world watching.

She has infuriated many with her conservative politics but has remained steadfast in her determination to bring trans issues to the forefront.

In the SI piece, she reflects on becoming the world’s best decathlete all those years ago: ‘The decathlon for me was the ultimate in what people think of as manhood. So for me it was a good place to hide. I had a need to prove myself, that maybe that woman that’s living inside of me really isn’t living there.’

But now that she is so publicly Caitlyn, Jenner is better able to emvrace her past.

“I was throwing out my past like it never happened,” she says. “And I’m very proud of those times. This was a big part of my past. It’s part of my life, it made me who I am.”