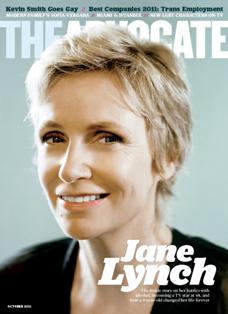 While Jane Lynch may be best known for her role on Glee, it was her spot on Two and a Half Men that got her into the biggest role of her life: motherhood.

While at a gala for the National Center for Lesbian Rights, Lynch first met Lara Embry, a fan of Two and a Half Men. Within a year, Lynch was married with children. In between filming season 2 of Glee, Lynch became immersed in motherhood.

“I became wifely,” she recalls, having run the errands while Embry worked. “I loved taking care of my girls.”

Jumping back to her Hollywood life, Lynch, whose role on Two and a Half Men brought her a different audience than her work on Glee, recognizes that costar Charlie Sheen is going through a tough time. Nevertheless, she has nothing but praise for the actor.

“He’s one of the nicest guys and a true leader on that set,” she says. “He’s going through his stuff now, but there’s a really solid, wonderful person in there, and I love him very much.” 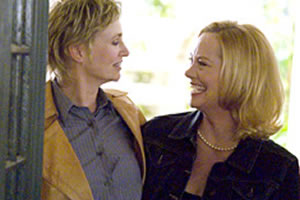 Lynch has praise for another A-list costar, Cybill Shepherd, who has two lesbian daughters, and who Lynch ushered through her first love scene with a woman as costar on The L Word.

“Of course, we were both clothed because no one wants to see us middle-aged broads flopping around in bed,” Lynch remembers, laughing. “I had one love scene under my belt, and I’m a lesbian in actual life, so I’m expected to take the lead, which I did.” Off camera, Shepherd has been just as supportive of LGBT people. “She marched in the parades before it was fashionable,” Lynch notes.

Despite her openness in Hollywood, Lynch doesn’t believe it helps her career.

“If anything, I think people respect me for not hiding,” she says. “But what it comes down to is we’re all just people. At the end of the day, I happen to go home to a woman. In Hollywood, all that matters is do you do your job and do it well.”

Because of this mantra, she prefers not to give advice to actors about coming out.

“Everybody’s going to have their own story, and we have to leave it up to them to decide how and when they’re going to come out. I would never give anybody advice that way. It’s so personal.”