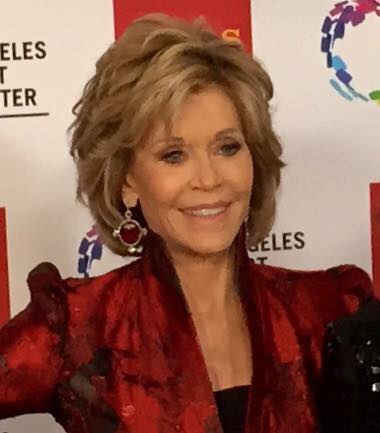 I’ve been going to the Los Angeles LGBT Center’s Vanguard Awards for more than a decade now and last night’s edition was one of the best yet.

Good friend Lily Tomlin presented Fonda with her award and described her 9 to 5 and Grace and Frankie co-star as a ‘vagina warrior’ who is ‘the role model for the modern woman.’

Fonda, still stunning at 77, paid tribute to transgender women who she said are ‘front line warriors in the battle for equality.

‘Anyone who gives up the penis privilege voluntarily is going to be a threat to the patriarchy.’

The two-time Oscar winner and longtime political activist lamented that in the current political climate in the US, ‘homophobes and bigots have become victims’ in the fight for LGBTI and female equality.

‘That’s what’s happening. This is serious stuff and none of us can rest on our victory laurels. We have to support each other. We have the same opponents. We are in this together.’ 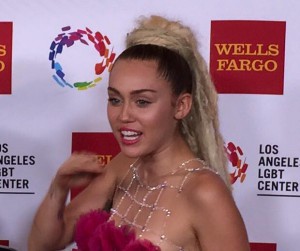 Cyrus was added to the program just this week and made her first appearance on the stage at the Hyatt Regency Century Plaza hotel when she licked a white piano being auctioned off by musician Linda Perry for $50,000.

Perry had requested Cyrus lick it to drive up bidding and it worked.

When she took the stage to accept her award, Cyrus spoke of the life-changing experience of visiting the Los Angeles LGBT Center at the start of the year.

‘The first day I got to visit you all is a day I will never forget,’ she said.

Cyrus said she left feeling more ‘self love’ than she had ever felt before.

“Given the opportunity to sit in on one of the support groups, I walked away with the feeling of self-love that I had never been able to give myself before,” she said, adding, “The LGBT Center had the key to the lock on my cage and they set me free and I want to continue to do the same for others.”

This led to her founding the Happy Hippie Foundation which has the mission of rallying young people to fight injustice facing homeless youth, LGBTQ youth and other vulnerable populations.

Cyrus, who also came out as sexually fluid this year, told the crowd: ‘I want you all to know that I feel grateful to be in a room with people who care so much about others. We’re going to continue to fight against judgment and stigma’

Also honored was filmmaker Ron Nyswaner, a writer and producer whose films include the recent Freeheld as well as Philadelphia and Soldier’s Girl.

His award was presented by Oscar winning actress Frances McDormand who Nyswaner met at church camp when both were 13.

Nyswaner remarked that as a kid, he not only admired fellow honoree Fonda but he ‘wanted to be her.’

He recalled only once hearing the word ‘homosexual’ during his entire childhood and that was at a family dinner when the mention of the word by a relative caused the entire family to ‘gasp from shock and horror.’

This led to his growing feeling that what he was was ‘unspeakable.’

‘That deep-rooted shame never completely goes away,’ Nyswaner said. ‘The challenge isn’t to get rid of it, it’s to do something with it.’

He had high prays for his fellow gays who’ve ‘turned shame into art, turned fear into love’ and as gays are becoming more accepted by the mainstream, he reminds younger people that ‘we are descendants of outlaws and rebels.”