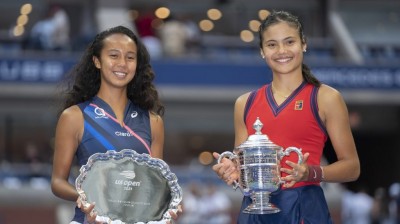 Wish they both could’ve won.

This US Open has been just a series of unexpected pleasures with the ladies final today being one of the biggest. Emma Raducanu beat fellow teen Leylah Fernandez 6-4, 6-3 in a hard-fought battle of high quality.

I went in rooting for Fernandez who had taken out defending champion Naomi Osaka and former champion Angelique Kerber. among others, but hard not to be thrilled for Raducanu who had fewer errors when it counted and became the first qualifier to win a grand slam title – and in straight sets! She won three qualifying matches just to reach the main draw then won seven more matches to take the title.

These two have all kinds of star quality which women’s tennis badly needs as Serena Williams, 39, is close to leaving the stage. Watch the videos below to see how poised, classy, thoughtful, and charismatic the two of them are.