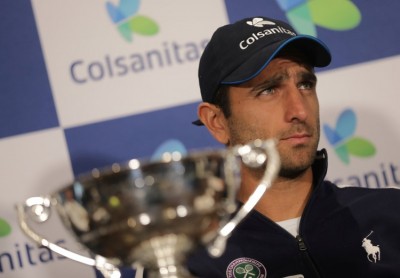 World number one doubles player Robert Farah, one of the hottest men on Instagram and an absolute Greg in Hollywood favorite for the past year, has been suspended from the Association of Tennis Professionals (ATP) Tour.

In a statement posted in Spanish on Twitter, Farah said he had tested positive for Boldenone and suggested the cause of the failed drugs test – in October in Cali – was due to contaminated Colombian meat.

“I’m going through one of the saddest moments of my life and, without a doubt, the saddest of my sporting career,” he said. “With my team and a group of advisers we’re looking into the steps to take in a process in which we hope to show that I’ve never used any products that violate fair play and ethics.”

He also wrote: “I am calm and confident in the results of this process since I have always acted correctly and honestly in my life. I will work harder than ever to return to the courts in the shortest time possible.”

Boldenone is widely used on cows to enhance their growth, but it is banned by the World Anti-Doping Agency (WADA). There is a possibility that Boldenone could have a presence in beef, and Farah admitted himself that ‘he’s sure that’s what generated the result’.

In 2018, the Colombian Olympic Committee warned its athletes about the potential of this happening from eating beef. Farah was tested two weeks prior to the positive test in question however that came back negative, and was tested more than 15 times throughout the past year.

I hope it’s all a misunderstanding that will be cleared up soon. I’m a big fan and was so happy to see he and partner Juan Sebastian Cabal win both Wimbledon and the US Open last year. They were also finalists at the 2018 Australian Open.