“I Love Lucy” Friday: When Lucy comes face-to-face with William Holden at the Brown Derby 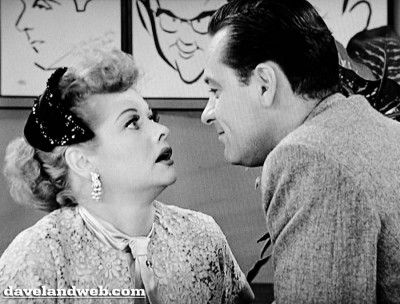 It is the first episode set in Hollywood during the show’s fourth season.

Arriving in Hollywood, Lucy goes star hunting at the Brown Derby, and finds William Holden in the next booth.

Later in the episode, we know that Lucy puts on putty nose that catches fire when she tries to disguise herself from the move star who she had encountered at the Brown Derby earlier in the day.

But this clip is the real gem in my opinion: the face-to-face encounter between Lucy and Holden at the restaurant. It is just brilliant comedy from the moment when Ethel is mouthing the words: “William Holden is behind you!” to when Lucy is trying to eat her spaghetti as Holden stares at her.

My favorite moment of all is when Ethel takes out a little pair of scissors to cut Lucy’s spaghetti which had gotten a little too unweildly.

FILE UNDER: I Love Lucy Friday