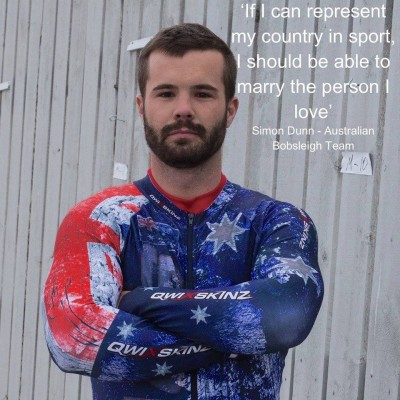 Love when people step up and speak out.

Australian rugby pro Simon Dunn, the first openly gay man to represent Australia in the sport of bobsledding, took to Instagram on Tuesday to speak put against his country’s ban on same-sex marriage.

Dunn, training to represent his country in the 2018 Winter Olympics in South Korea, posted a photo of himself with the message: ‘If I can represent my country in sport, I should be able to marry the person I love.’

He also wrote: ‘I love Australia. I’m honored to represent Australia and i miss Australia every single day. But it is never far from my mind that the amazing country i call home is yet to legalize same-sex marriage. Australia it is time for equality!’

Dunn was deeply upset last week at a story involving what happened to a British man whose husband died in a freak accident during their honeymoon in Australia. The country initially refused to recognize the marriage and denied the widower next of kin status.

‘A truly heartbreaking story,’ Dunn wrote in a Facebook post last week. ‘Australia it is time to not only introduce same-sex marriage but have all our state and territories recognized those marriages carried out overseas, anything else is truly an injustice.

‘These outdated laws have denied a loving husband his rights in the most difficult of times,’ he added/ ‘The love between gay and lesbian couples is no less than that of heterosexual couples.’

Dunn came out publicly in December 2014.