“How to Get Away With Murder” actor on character being HIV-positive: “People have demanded it be rewritten” 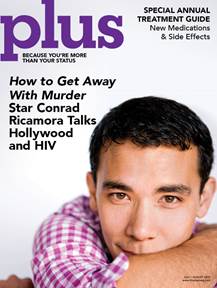 When the characters of Oliver and Connor were tested for HIV in the season finale of ABC’s How to Get Away With Murder, it seemed like only the promiscuous Connor (played by Jack Falahee) had a real chance of testing positive.

But there was a surprise twist.

Connor was not infected but his computer nerd boyfriend Oliver was.

“People have demanded it be rewritten,’ actor Conrad Ricamora, who plays Oliver, tells HIV Plus Magazine.

‘Some people are really, really heartbroken and sad. People come up to me and tell me all the time, “Oh! I cried so much when I found out!” Just a lot of sad people, because, I guess, everybody loves Oliver.’

Ricamora’s reaction to tackling the new dimension of the role is far different.

‘It’s a huge honor to be able to bring this back into the consciousness,’ he says. ‘I remember growing up in the ’90s, it was such a big educational topic.… [But] in the last couple of years, it’s slid out of the consciousness of mainstream America.’

The actor adds that it’s ‘good to remember that this still can happen—it still does happen—and just to be aware and let people know that safe sex still matters.’

Ricamora thinks that it’s unhealthy that so many people in the US are afraid to talk about sex in general.

‘If sex is continually regarded as a taboo in this country, then that means more people are going to make less smart decisions.’