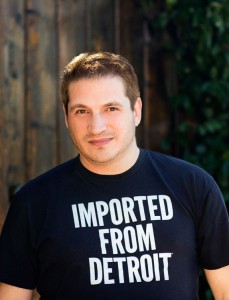 Hollywood stuntman and stunt coordinator Shawn Balentine has come out publicly as a gay man in a deeply personal Facebook post.

‘It’s time to peel back the layers,’ he wrote. ‘I’ve been waiting until I was ready to come out as gay man on my terms. I’m ready now.’

Balentine has doubled for such actors as Patton Oswalt, Jack Black and Oliver Cooper in television, film and music videos.

‘I know I could lose friendships over this and work too,’ he admitted. ‘In the world where I work as a Stuntman/Stunt Coordinator this might be viewed as a big deal and that’s a big reason why I’ve held on to this layer for so long.

‘I’ve been to the edge and back, praying and losing days of sleep over this decision, but if this helps even one or two out there from feeling alone, being blackmailed, or told to your face that someone doesn’t approve of your spiritual practices then I’m here for ya and have one HUGE shoulder you can lean on because I’ve been in your shoes.’

He added: ‘I’m not the kind of guy who wants to talk about being gay all the time or go marching down the street. But I need to be honest with myself and with all of you. I need to get this off my chest because this is the layer I’ve never wanted to let you know existed.’

‘Finally, at my age, I’ve been able to expose this layer to all of you. I’m perfect just the way I am. And it feels damn fine to let see this layer of my life. Welcome friends, to knowing the real Shawn.’ 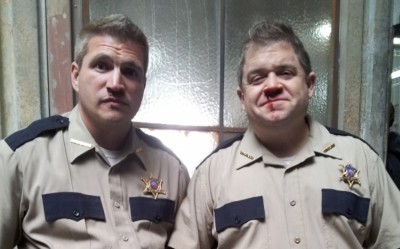 In a follow-up post, Balentine thanked friends and colleagues for their support including Oswalt for whom he has doubled for on Brooklyn Nine-Nine, Justified and Battle Creek.

Oswalt wrote a Facebook post of his own in which he described Balentine as ‘the first professional stuntman to come out of the closet.’

‘I could not be prouder of the guy,’ Oswalt wrote. ‘I’d walk through fire for him. Which is fair, considering he’s walked through explosions, walls and, on Brooklyn Nine Nine, a kiddie pool full of tomato sauce.’

Balentine wrote that ‘Patton’s post to his fans blew me away’ but he also acknowledged ‘gross rude texts’ from some people.

To them he wrote: ‘Since this decision is effecting you so much, it’s not going to change the fact that I came out. I respect your beliefs. However, you do not have the right to demonize me for what I did or who I am.’