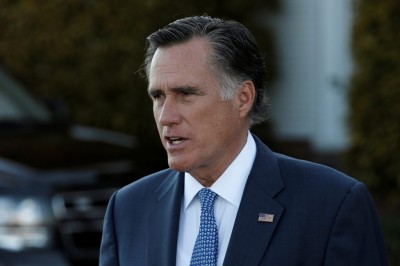 Have not posted much about the impeachment trial in the U.S. Senate because it has profoundly upset me as an American to see so many lawmakers willing to give someone so clearly unfit for office a pass.

But one Republican, Sen. Mitt Romney, is not.

In a dramatic speech just two hours before the Senate was to take final votes on the articles of impeachment, Romney said in part:

“As a senator juror, I swore an oath before God to exercise impartial justice. I am profoundly religious. My faith is at the heart of who I am. I take an oath before God as enormously consequential. I knew from the outset that being tasked with judging the president, the leader of my own party, would be the most difficult decision I have ever faced. I was not wrong.”

“Accordingly, the president is guilty of an appalling abuse of public trust. What he did was not perfect. No, it was a flagrant assault on our electoral rights, our national security, and our fundamental values. Corrupting an election to keep oneself in office is perhaps the most abusive and destructive violation of one’s oath of office that I can imagine.”

“You see, I support a great deal of what the president has done. I voted with him 80% of the time, but my promise before god to apply impartial justice required that I put my personal feelings and political biases aside. Were I to ignore the evidence that has has been presented and disregard what I believe my oath and the Constitution demands of me for the sake of a partisan end, it would, I fear, expose my character to history’s rebuke and the censure of my own conscience.”

“Does anyone seriously believe that I would consent to these consequences other than from an inescapable conviction that my oath before God demanded it?”

“I acknowledge that my verdict will not remove the president from office. The results of this senate court will, in fact, be appealed to a higher court, the judgment the American people. My vote will likely be in the minority in the senate, but irrespective of these things, with my vote, I will tell my children and their children that I did my duty to the best of my ability believing that my country expected it of me. I will only be one name among many, no more, no less, to future generations of Americans who look at the record of this trial. They will note merely that I was among the senators who determined that what the president did was wrong, grievously wrong.”