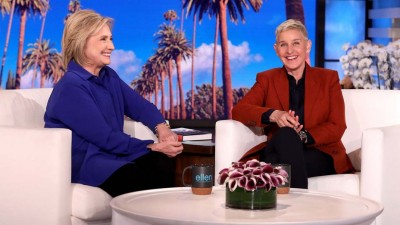 Hillary Clinton talked with Ellen DeGeneres about her Hulu documentary Hillary, and how it was “emotionally draining” to relive the Monica Lewinsky scandal for the new docuseries.

She also shared that she hopes her willingness to address difficult times in her own life will encourage others to be more supportive of people who have to make tough decisions that are best for themselves and revealed that she twice turned down former President Barack Obama’s offer of the position of Secretary of State.

Of Trump’s impeachment acquittal she said: “I wasn’t surprised because it’s hard to get 67 votes to convict and remove somebody. I was still disappointed that not more of the Republicans were willing to take the stand that Mitt Romney took.” She added that Romney’s speech was “extraordinary.” Throughout the speech, Romney said that “he felt the weight of history on his shoulders and that he was going to vote to convict on one of the articles of impeachment.”

She hopes that all American voters “pay attention and say to themselves, ‘Hey, you know, he has to be held accountable.’ And now the way to do that is with the election.”