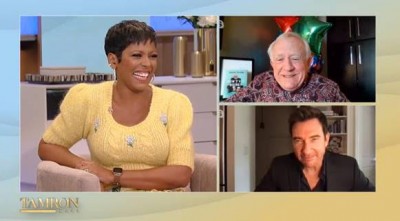 On today’s edition of Tamron Hall, Emmy winning actor Leslie Jordan joined the show to discuss his new book How Y’all Doing? Misadventures and Mischief from a Life Well Lived and opened up about his battle with addiction and the pivotal moment that inspired him to turn his life around. He also shared his excitement for getting to work with lifelong hero Dolly Parton on his new gospel album Company’s Comin’ and reflected on his relationship with the church growing up as a gay man. Jordan, who has dubbed himself the president of “The Dylan McDermott Fan Club” also received a special birthday surprise from the actor himself.

Jordan on meeting his hero Dolly Parton:
“I grew up very near below where Dolly grew up and I’ve just always had this dream of meeting her and I even drove one time, from Knoxville, where I was in, I went to the University of Tennessee, and I drove up to Pigeon Forge where she’s from, and she performed in the high school auditorium. And when I met her, I told her that and she said, ‘Oh, yeah, that was 1973.’ And I said, ‘Dolly, I was there.’ And she said, ‘Oh, you’re just making that up.’ I said, ‘No, I’m not darling. I remember you came out and you said, What’s a country girl without her haystack?’ Because that’s when her hair was really high. We just hit it off. You know, she’s everything. When we got to meet, people would say, well, what’s she like? Well, you know what she’s like. She’s just Dolly.”

Jordan on how serving jail time helped him overcome addiction:
“Well I think that…I’ve always had addiction problems I don’t know if that’s a gene, or what it is but I think anyone who has problems looks back and thinks at what point did it go from recreational, because I had a good time. Oh, I had a good time, to medicinal, where you’re just kind of oh my gosh you know this has got to stop, and then you can’t, you know you just find yourself all of a sudden I’m drunk, how this happen? You know, I didn’t plan this. I got up this morning, said I’m gonna do this, I’m gonna do that now all of a sudden I’m drunk. And it’s everything that I have learned about life I learned in recovery, so I’m so grateful…I remember calling…the hardest part was, you know, having to tell my sweet mother and call from there [jail] and I had this plan where I was going to maybe tell her I was at Betty Ford. It’s really loud here she’s gonna know I’m not at Betty Ford, So that was the hard part, you know, but I’m telling you right now, if you are having problems, 28 days or whatever I served in the county in the Los Angeles County Jail, will get you sober.”

Jordan on coming out to his mother and how he dealt with her reaction of telling him to live quietly:
“You know, I was expecting for her to maybe pull the Bible out or.. And she didn’t. You know, she really just didn’t want me to be ridiculed, she said ‘I just couldn’t bear that,’ you know, so I tried to live quietly. Here I am! You know, I just went my path. And she knows that, she’s so proud of me. She’s the first one that calls. She’ll call right when this show is over and tell me everything I said wrong.”

Jordan on his new country gospel album and rebuilding his relationship with the church:
“When I’m being very dramatic I’ll say well I walked away from the church well no, I didn’t. I quit going for a while and that just happens. But my friend Travis Howard, came up with this idea and said we should record hymes and sing them because he also grew up in the church, and we’d love this music, I mean, you know, he did most of the research and Danny Myrick, our other producer, came up with this list of events hymes I knew every one of them. I knew almost the words to every one of them. And so it was just a labor of love, you know, I just knew it was the fabric of my childhood, it’s what I heard growing up and it’s what I, you know I hear today when I need comfort or whatever. And so, I never had to kind of reconcile those two, I don’t know what happened between 17 and 65 but, you know, I’m perfectly happy with who I am and what I am, so that made it a lot easier.”