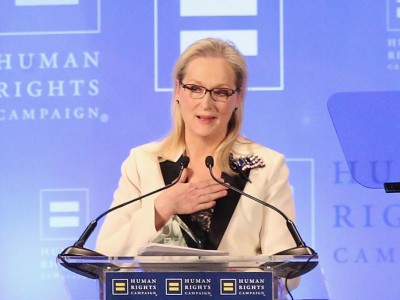 Documentary filmmaker Ken Burns presented three-time Oscar winner Meryl Streep with the Human Rights Campaign’s National Ally for Equality Award at HRC’s Greater New York event last Saturday. A month after Golden Globes Award speech taking Donald Trump to task, she continues in the vein and more on this night. Here is text of much of what she said:

So I honestly can’t imagine what I have done to deserve this great honor. In The Hours all
I did was kiss Allison Janney in take after take after take after take. And it wasn’t that
hard at all. And I’m also fairly proud of a very jolly portrayal of a gay conversion
therapist on Lisa Kudrow’s web therapy that I did. And I feel our Vice President might
want to check out those episodes because my character’s views seem to dovetail with his,
although it involves comedy, so I don’t know if it’s going to penetrate.

And I want to thank Chad (Griffin) and everybody at the Human Rights Campaign for this moving
and very meaningful honor, which I dedicate to my gay and trans teachers, colleagues,
mentors, directors, friends, all of whom should take the credit for me being up here
because they taught me, from a very young age, and they continue to remind me every
day of the very best lesson and that is to be yourself and love and take joy in your work
and what you do.

And I’m very grateful to this incredible organization, the Human Rights Campaign, for
what you have done in such a smart, strategic, and systematic way, to secure and
safeguard the rights of LGBTQ Americans. Most of the advances in acceptance and
advocacy and law have come straight from the work of this organization. Well I don’t
know how straight it is but– But you have, you have made the lives of people I love
better, stronger, and safer.

When I was a little girl growing up in middle class New Jersey, my entire artistic life was
curated by people who lived in the straight jacket of a very conformist, suburban life. In
the late 50s and early 60s, all the houses in my neighborhood were the same size. In the
developments, they even were the same shape and color and style. And in the schools,
your job was to put pennies in your loafers and look the same as everybody else and act
the same as everybody else. Standing out, being different was like drawing a target on
your forehead and you had to have a special kind of courage to do it.

And some of my teachers were obliged to live their whole lives hidden, covertly. But my
sixth and seventh grade music teacher, Paul Grossman, was one of the bravest people I
knew because later, when I was in graduate school, I read that he had transitioned and
become one of the first transgender women in the country. And after the operation, she
reported back. As Paula Grossman. To our middle school in Basking Ridge, New Jersey
where she had taught for 30 years and she was promptly fired. But she pursued her case
for wrongful dismissal and back pay, through the courts for seven years, all the way to
the Supreme Court. Unfortunately, her case was not accepted and she lost, but she won
her pension under a Disability Allowance settlement, although she was disabled only by
the small minds of the school board.

She was a garrulous, cantankerous, she was a terrific teacher, and she never taught again.
But her case did set the stage for many of the discrimination cases that followed. She and
her wife raised their three girls. She worked as a town planner and she had an act playing
piano and singing in cocktail lounges around New Jersey.
But I remember her as Mr. Grossman and I remember when he took us on a field trip to
the Statue of Liberty in 1961. And our whole class stood at the feet of that huge, beautiful
woman and we sang a song that he had taught us that was taken from the lyrics, the lyrics
were taken from the poem by Emma Lazarus engraved at the base of the monument.
[SINGING] Give me your tired, your poor, your huddled masses yearning to breathe free,
the wretched refuse of your teeming shore. Send these, the homeless, tempest tossed to
me. I lift my lamp beside the golden door.
I can’t remember what I did Tuesday, but I remember– I remember that song Mr.
Grossman chose to teach us. It stirred my 11-year-old heart then and it animates my
conscience today. That’s what great teachers do. She died in 2003, god rest her soul.

********
Men and women of color demanded their equal rights. People of a sexual orientation and
gender identification outside the status quo also demanded their equal regard under the
law. So did people with disabilities.
We all won rights that had already been granted to us in the Constitution 200 years
before, in theory. But the courts and society finally caught up and recognized our claims.
And amazingly, and in the terms of the whole of human history, blazingly fast, culture
seemed to have shifted. All the old hierarchies and entitlements seemed to be on shaky
ground, which brings us to now.
We shouldn’t be surprised that fundamentalists of all stripes, everywhere, are exercised
and fuming. We shouldn’t be surprised that these profound changes come at a much
steeper cost than it seemed we were gliding through them in the late 20th century. We
shouldn’t be surprised if not everyone is totally down with it. But if we live, if we live
through this precarious moment, if his catastrophic instinct to retaliate doesn’t lead us to
nuclear winter, we will have much to thank this president for because he will have woken
us up to how fragile freedom really is.
And his whisperers will have alerted us to the potential flaws in our balance of power in
government, to how we’ve relied on the goodwill and selflessness of previous occupants
of the Oval Office and how quaint notions of custom, honor, and duty compelled them to
adhere to certain practices of transparency and responsibility. How easily all of this can
be ignored and how the authority of the executive, in the hands of a self dealer, can be
wielded against the people and the Constitution and their bill of rights. The whip of the
executive can, through a Twitter feed, lash and intimidate, punish and humiliate, delegitimize
the press and all the imagined enemies with spasmodic regularity and easily
provoked predictability.
So here we are in 2017 and our browser seems to have gone down and we are in danger
of losing all our information. And we seem to be reverting to the factory settings, but
we’re not. We’re not going to go back to the bad old days of ignorance and oppression
and hiding who we are, because we owe it to the people who have died for our rights and
who have died before they even got their own. And we owe it to the pioneers of the
LGBTQ movement, like Paula Grossman, and to the people on the front lines of all civil
rights movements not to let them down.
I am the most over rated and most overdecorated and currently, currently, I am the most
over berated actress, who likes football, of my generation. But that’s why you invited me
here, right? OK. The weight, the weight of all my honors is part of what brings me here
to the podium. It compels me. It’s against every one of my natural instincts, which is to
stay the fuck home.
It compels me to stand up in front of people and say words that haven’t been written for
me but that come from my life, from my convictions, and that I have to stand by because
it’s hard to stand up. It’s hard! I don’t want to do it. I don’t want to be here. I want to be
home and I want to read and garden and load my dishwasher. I do. I love that.
It’s embarrassing and it’s terrifying to put the target on your forehead and it sets you up
for all sorts of attacks and armies of brownshirts and bots and worse. And the only way
you can do it is to feel you have to, you have to. You don’t have an option. You have to
stand up, speak up, act up!
Thank you. You are. You are it! You are it!
And when I load my dishwasher from where I live in New York City, I can look out my
window and I see the Statue of Liberty. And she reminds me of Mr. Grossman and the
first trip there and all my great grandparents who came through and passed by that poem.
Many of them fled religious intolerance in the old world and we Americans have the right
to reject the imposition of unwanted religious practice in our lives. We have the right to
live our lives with God or without her, as we choose. There’s a prohibition in this country
against the establishment of state religion in our constitution and we have the right to
choose with whom we live, whom we love, and who and what gets to interfere with our
bodies.
As Americans, men, women, people, gay, straight, LGBTQ, all of us have the human
right to life and liberty and the pursuit of happiness. And if you think people were mad
when they thought the government was coming after their guns, wait until you see when
they try to take away our happiness.