It’s quite rare that a character who was only supposed to be in a show for a handful of episodes proves to be so popular with fans that he is brought back and made a full-fledged regular.

That is exactly what happened with the character of Scotty on ABC’s Brothers & Sisters and it had everything to do with the performance and the presence of the actor who plays him, Luke Macfarlane, and his lovely chemistry with Matthew Rhys who plays his on-screen husband Kevin.

Kevin and Scotty have been trying to become adoptive parents this season and have weathered the most severe test to their marriage: Scotty cheating on Kevin with a bartender at his restaurant.

Fans of the show were kind of horrified because it seemed so not like Scotty! But in the follow-up episodes as the two found their way back to each other, we understood what happened more and it just made Scotty more human, less of a saint! 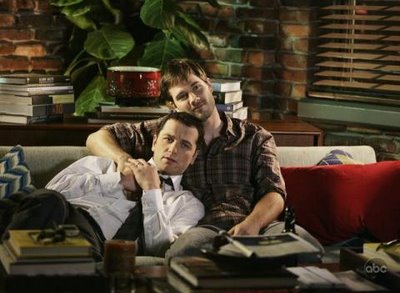 While Matthew Rhys is a straight man playing a gay man on television, Luke took the bold step and came out publicly as a gay man in 2008. He could have been like so many other gay actors on TV shows and just remained private or vague about their sexuality but Luke chose to be out and I have so much respect for him because of that.

Luke, who studied drama at Julliard, was previously best-known for his role as Pvt. Frank “Dim” Dumphy in the series Over There. The Canadian actor had never given any interviews about his personal life until discussing his sexuality for the first time in an interview with the Canadian newspaper The Globe and Mail in 2008.

I spoke with him a few weeks after that at an event and he said: “I decided to do that interview, I decided to answer those questions in an effort to make my life simpler and that’s going to contunue to be my motto. So, I’ll have to say, it hasn’t been that hot a light on me at all.”

I’m just so glad that young and talented actors like Luke, Neil Patrick Harris, TR Knight, Chris Colfer, Jesse Tyler Ferguson,  John Barrowman, Jonathon Groff, Sean Hayes and several others are not following the example of Richard Chamberlain and staying closeted until their late 60s and have a book to sell!

Anyway, Luke turns 31 years old today and I thank him for his performances on screen and on stage and for stepping up and being an openly gay man. He’s helping to change the world!