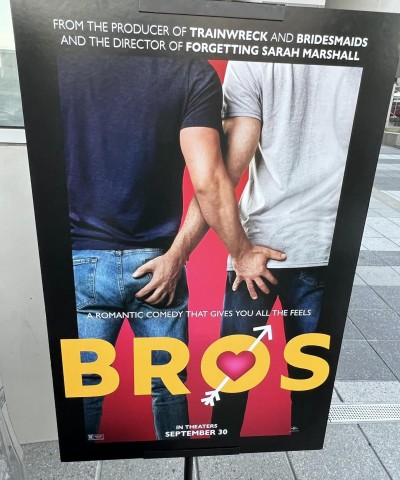 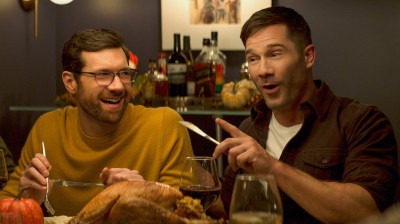 Went to a screening of Bros last night at the cool space NeueHouse Hollywood on Sunset.

The movie won’t be out for a few weeks but we certainly have been hearing a lot about it since mid-summer thanks to tireless promotion from stars Billy Eichner and Luke Macfarlane. I’m a big fan of both of these guys so you gotta figure they had me at hello. But I genuinely enjoyed their movie, laughed a lot, thought the writing was very good and the acting good two.

We know what Macfarlane can do as we’ve seen since his days as Scotty on ABC’s Brothers & Sisters then later when he became a hot leading man on a bunch of Hallmark movies of which I have seen every one of! He’s also done other series and has many stage credits. He’s so attractive and seems so decent that you kind of want to marry him. And I realized during this movie that it is impossible to get tired of seeing Macfarlane shirtless.

But Eichner, a co-writer and an executive producer, is the revelation in this movie because he gets to really inhabit a complicated character who has the potential to be a real turnoff. He’s not even though he is, in many scenes, the character is a lot. It’s a real triumph for Eichner and I rooted for this seemingly mismatched couple to end up together.

Bros will hit theaters on September 30.