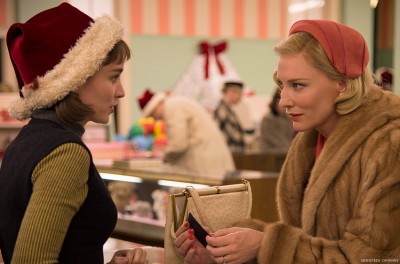 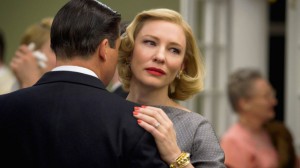 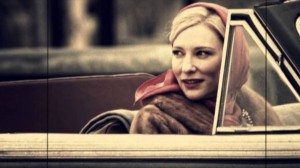 Is it possible that Cate Blanchett could win her second Oscar in three years – and third overall – for her astonishing performance in Carol?

I absolutely think so.

In this Todd Haynes-directed masterpiece, Blanchett plays a married suburban socialite who becomes romantically involved with a younger shopgirl (Rooney Mara) who she meets while Christmas shopping for her young daughter.

Elegant throughout the film with a killer 1950′s-era wardrobe, Blanchett is sexy and smoldering during her courtship with Mara’s character.

But we also see her as a devoted mother who suddenly becomes completely vulnerable when her estranged husband (Kyle Chandler) takes legal action to keep her away from their daughter.

There’s a magnificent scene in an attorney’s office where Carol calls on her husband, who holds all the legal cards at that point, to do right by her when it comes to their daughter.

It’s the kind of scene that wins people Academy Awards.

I had the same feeling about Blanchett’s Oscar hopes after seeing Carol on Friday night that I did after seeing Blanchett in Blue Jasmine two years ago. Plus this year, she also delivered an outstanding performance in Truth as former CBS News producer Mary Mapes.

So far, I think she’s the one to beat.

I don’t want to slight Mara because she is also excellent. The chemistry between her and Blanchett is electric and very believable. Her far younger character is just coming into her own personally and professionally and Mara makes you root for her to flourish and you feel for her so deeply as she suffers through the anguish of her first real heartbreak.

Carol is currently in very limited release but you will most certainly want to see it once it comes to a theater near you.