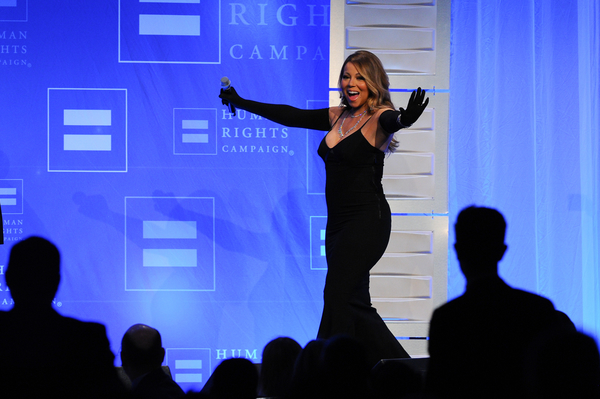 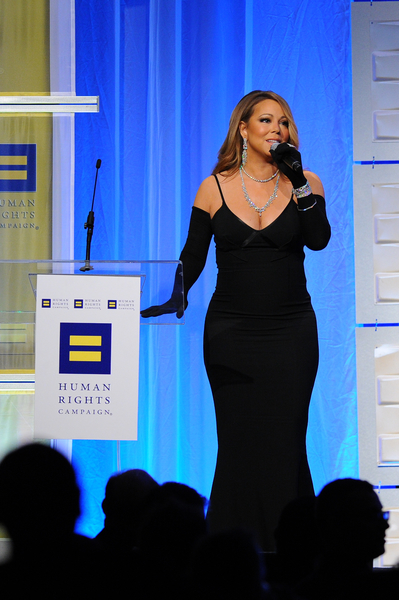 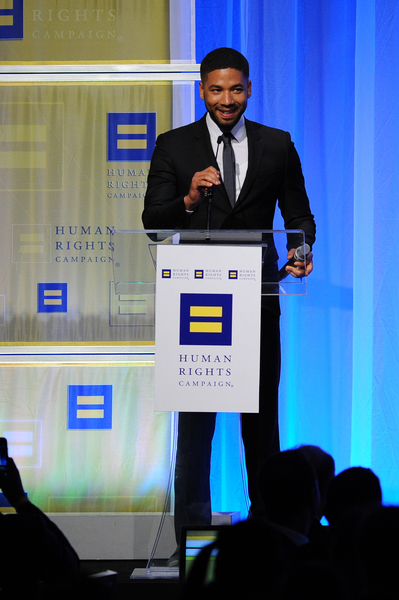 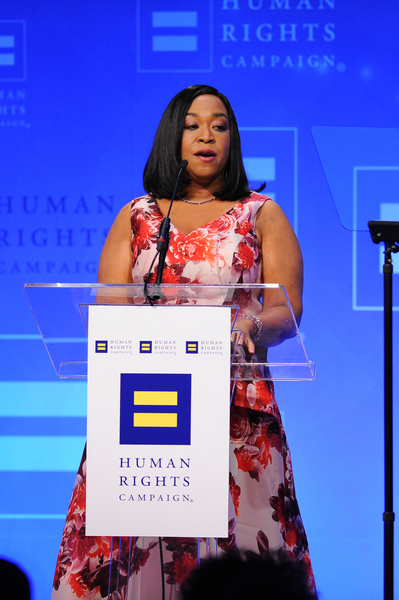 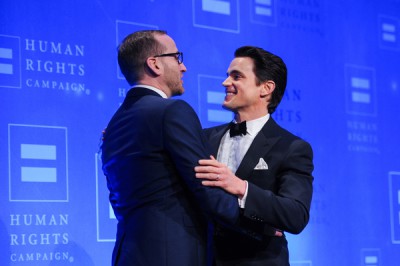 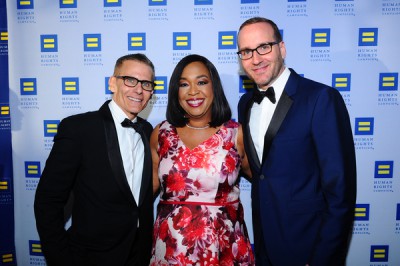 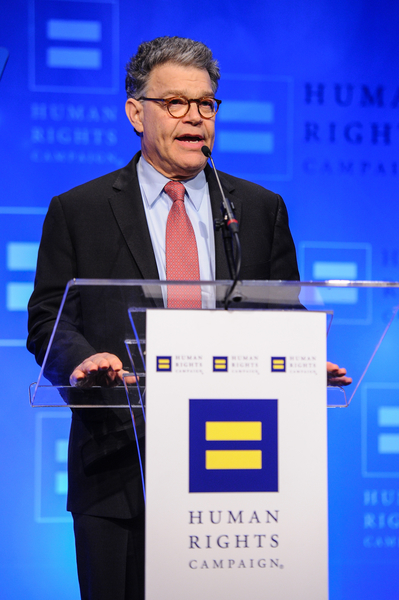 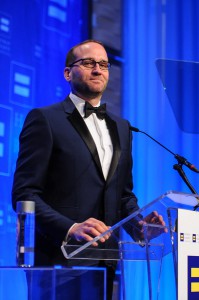 When word got out that Mariah Carey would be performing at last night’s Human Rights Campaign Dinner in Los Angeles, the event quickly became a sellout.

The crowd of 1,200 had to wait until the very end of a long, star-studded evening, before the Grammy winner was introduced by Empire star Jussie Smollett.

‘I don’t know how to explain how much a love this woman … she is one of the greatest vocalists of all time,’ said Smollett who came out publicly as a gay man earlier this month.

‘I’m about to pee myself,’ he admitted. ‘She’s right there.’

Carey took the stage and before launching into her classic ballad, Hero, she told the crowd she was a bit hoarse from recording her latest album.

She sounded hoarse for sure but sang with conviction and passion.

‘I’m honored and humbled to be here tonight,’ she said. ‘Being multi-racial and all these other things and the daughter of a true opera diva, I was surrounded by all different types of people growing up and that’s why I have an open mind.’

She added that she thinks she was one of the first people to have gay uncles and hoped it wasn’t politically incorrect to call them ‘Guncles.’

‘They were my template for a great relationship,’ she said. ‘When there was a snowstorm or anything happened, we walked up to their house and they took care of us.’

Rhimes, whose shows include Scandal, How to Get Away With Murder and Grey’s Anatomy, gave a powerful speech about feeling like an outsider growing up and how writing saved her.

Her writing then, and now, has the recurring theme of ‘you are not alone’ and that has been played out with numerous LGBT characters and storylines on her various shows over the years.

‘You should be able to turn on the TV and see your tribe,’ Rhimes said. ‘I’m not diversifying TV, I’m normalizing TV.’

Lombardo, who grew emotional while thanking his husband and children in the audience, was honored for bringing the issues surrounding LGBT equality into homes across America through such programming as The Case Against 8, The Normal Heart, and Looking, among many others.

‘I’ve been incredibly blessed – some would say lucky – to have lived the life I’ve had,’ he said.

Lombardo recalled how a law professor in the 1980s told him he would never have a successful career if he admitted to anybody that he was gay.

But he couldn’t do it and when he left law and joined HBO 30 years ago, he ‘felt like I could breathe again.’

‘The thought of living two lives – personal and professional – just seemed like a death sentence to me,’ he said.

US Sen. Al Franken opened the evening as the featured speaker and he described himself as being part of the LGBT community thinking of himself as ‘half of B.’

‘I was in showbiz once myself,’ said the former Saturday Night Live star. ‘But I am now a US senator and I won’t let you forget it.’

On a more serious note, Franken spoke passionately of his determination to get the Student Non-Discrimination Act (SNDA) that he is sponsoring finally passed by the US Congress.’

‘It may take time but vote by vote we are going to get there,’ Franken said. ‘When a parent calls a school to say, “My child is not safe,” that school would have to listen.’

Franken was followed onto the stage by Greg In Hollywood fave Matt Bomer who introduced HRC President Chad Griffin.

Mindful that 37 states in the US now have marriage equality and the rest of the country could follow through cases currently before the US Supreme Court, Griffin looked at the bigger picture in his speech.

‘Even as we approach this historic moment, it’s our job right now to look beyond marriage – to reset the goal post,’ he said.’

He pointed out that there is still no federal LGBT non-discrimination act to cover employment, housing, education and public accommodation.

‘A couple who gets married at 10 am can be fired from their jobs at noon and evicted from their home by 2 pm,’ Griffin said.

He added: ‘The time has come in this country for full federal equality – nothing more, nothing less. … We are not done yet.’ 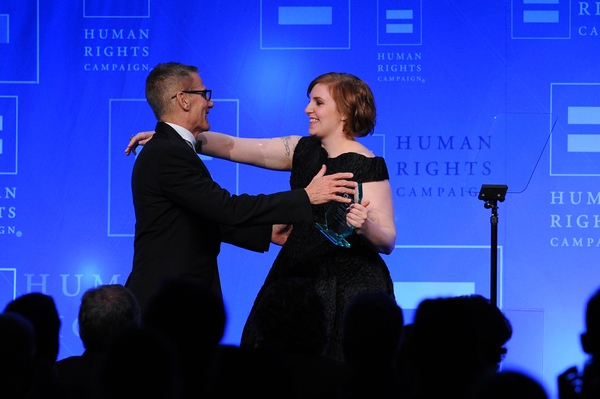 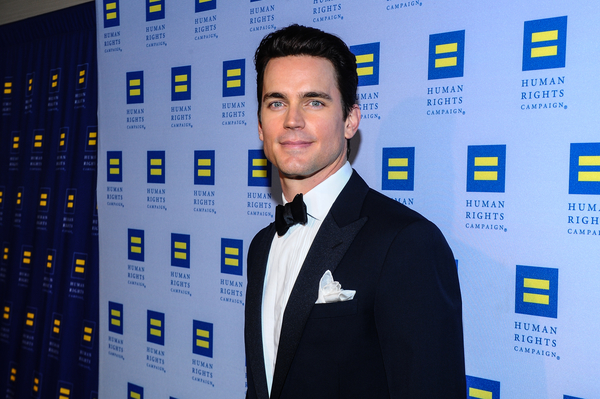 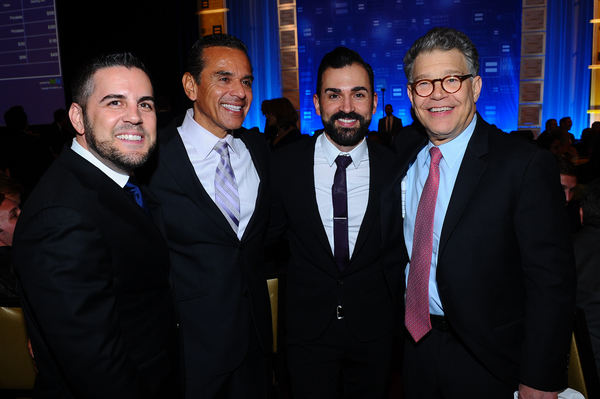 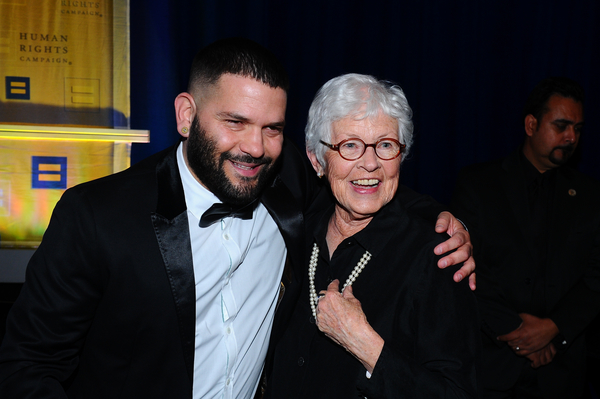 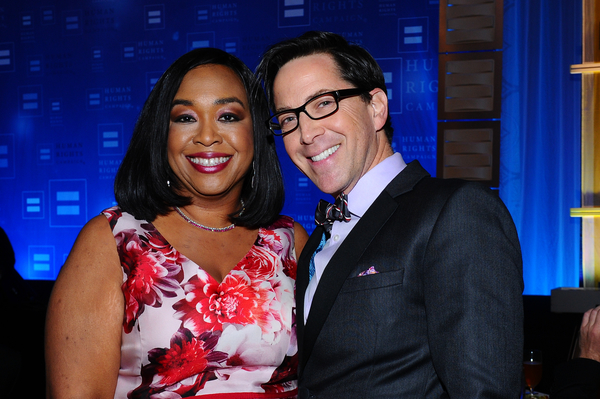