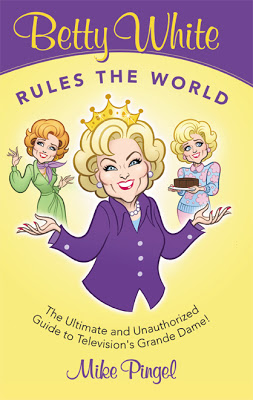 I ran into Mike last night at the 50th anniversary screening of The Birds at Grauman’s Chinese Theatre and he gave me a copy of the book and told me to turn to page 134.

On that page, he quotes some of what I’ve written about in the past about the relationship between Betty White and Bea Arthur:

“Bea Arthur had an intense dislike for Betty White,” wrote Greg Hernandez in a recent article about the feud on his blog, GreginHollywood.com. He had witnessed Bea’s coldness toward Betty firsthand at an event at the Museum of Television in Beverly Hills. The three beloved Golden Girls – Bea, Rue and Betty – were doing a Q&A. Rue was planted between them like a referee; Bea did not engage Betty once despite Miss White’s efforts to draw her in. Then after the event ended, Greg was standing near the stage and witnessed that Bea hugged Rue goodbye but left without saying anything to Betty who followed her backstage and called after her.

“It made me feel a bit sad for Betty. But that’s not to say that I didn’t think Bea was terrific. Not only was I a huge fan, but I was in attendance about six months before she died when she was inducted into the Television Academy Hall of Fame. We were briefly introduced, and she promised an interview. When we didn’t have time to do it that night, she called the next day, we had a nice chat ajd she could not have been more lovely,” Hernandez reported.

Find out more about Mike’s book at www.mikepingel.com and www.bettywhiterulestheworld.com