Greg In Hollywood Interview: Greg Louganis reflects on Matthew Mitcham, being a mentor & living with HIV 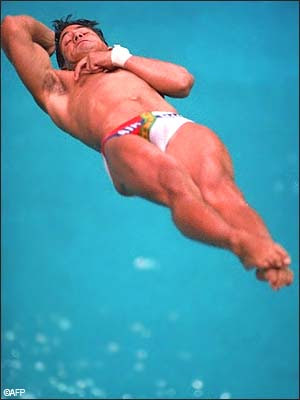 We lavish a lot of attention in the media on people who have so little to say and accomplished so little in their lives.

So it is so refreshing to be able to spotlight Greg Louganis, one of the greatest Olympic athletes in history who overcame great obstacles in his life to reach the top of his sport and who remains an inspirational figure for so many.

Greg’s story means so much to me because I was coming out in a big way in the mid-90s and it was then that he also came out and wrote a deeply-felt memoir called Breaking the Surface in which he revealed that he had been HIV positive when he won his third and fourth gold  medals at the 1988 Olympics.

Greg attended last night’s opening of A Chorus Line at the Pantages Theatre in Hollywood and it was there that we had our chat.  He himself has appeared in many productions over the years including most recently, the play The Little Dog Laughed. He also appeared in the recent movie Watercolors as, you guessed it, a swim instructor.

It’s a role he’s ideally suited for not just because he is a champion swimmer, but he’s also back in the Olympic fold as a mentor.

“I’ve just been recently invited back into U.S. Diving as a mentor to work with the young kids and the coaches that are up and coming,” said Greg who won his first medal – a silver – at the 1976 Olympics in Montreal when he was still in high school.

“We only got one medal in diving in 2000, then absolutely no medals in 2004, no medals in 2008,” he explained. “So now our goal in the United States is to get a team or individual on the podium. That’s kind of what the thrust is for US Diving. So it’s great to be back involved.”

Greg had to sit out the 1980 Olympics in Moscow because of the US boycott but he was ready in 1984 when they were held in LA. He won gold medals in springboard and platform diving that year then repeated four years later.

If anyone can inspire the younger divers, it is a man who’s been there.

Greg was not openly gay when he competed in the Olympics and is very inspired by Australian diver Matthew Mitcham, the only openly gay male athlete at the 2008 Olympic Games, who soared to a gold medal in the 10 meter platform.

“I thought that was awesome, it was really great,” Greg said. “I think we’ve come a long way. We still, of course, have a long way to go. The whole coming process is such an individual thing. For him, it really freed him up to become the athlete that he could become because he felt stifled by all the secrets and I really commend him. I look forward to meeting him, I’ve never met him!”

Greg has long been an outspoken HIV awareness advocate and has a lot to say to young men out there who refuse to pay heed to the terrible toll the disease can take.

When Greg announced that he was HIV-positive in the mid-90s, there were not yet the drugs available that prevent the disease from being a death sentence. But, he says, the breakthroughs are no reason to not remain vigilant.

“Sure, we’ve made great strides with medications and treatments. But what I try and share with young people is all the hardships. I wouldn’t wish my drug regiment on anyone. I swallow a lot of pills and the side effects from the medications are not pleasant.”

“The things that I’ve had to go through and endure and in and out of the hospital and that sort of thing. Yes, Magic Johnson and myself, we’re out and about, we’re active and we’re doing good things but it doesn’t mean that the disease is manageable. I can’t stress it enough how important it is to be responsible. It’s something that they can avoid! We’ve learned this through education and we’re trying to get that through to young people who think that they’re indestructible.”

“It’s really hard. A lot of it comes down to self-esteem and trying to build self-esteem in our youth and to get them to love themselves enough to protect themselves and those that they’re with.”

FILE UNDER: Out Stars, Sports