Are you hooked yet on the terrific new reality series The Fabulous Beekman Boys?

Brent has other plans for the property that weekend: the first-ever wedding at The Beekman Farm where these former gay urbanites produce goat milk soap and other organic products.

Josh confesses that his disappointment lies less in the fact that he didn’t get a birthday party and more in that another couple is getting married there before he and Brent can legally tie the knot themselves with same-sex marriage still not legal in the state of New York.

I met Brent and Josh back in January at the TV Critics Press Tour and we had a nice chat after their session with reporters.

Brent told me he had no problem with the show being labeled as some kind of real-life Green Acres, the popular 60s sitcom starring Eddie Albert and Eva Gabor about a fish-out-of-water couple who move to from Manhattan to a farm: “We know that people are going to make that comparison and I think at some level that’s truthful.”

He’s very grateful to Discovery and Planet Green for seeing them as more than a gay couple moving from the city to the country: “They saw us as a couple of people at a transition point in their lives who were doing something that will resonate with a lot of people. We were just a couple that has been in a 10-year-long relationship.”

So how did it all come together? 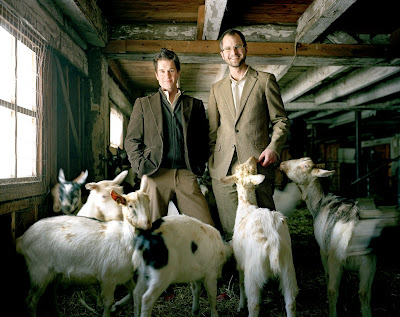 Explained Brent: “We started our farm and our company about a year-and-a-half ago (in January) and the president of Planet Green got on our email list and we would send out email newsletters about what we were doing on the farm and it intrigued her so she approached us about doing the show.”

I wondered if the cameras captured a true picture of their lives and their personalities.

“There’s not a camera in the world that would stop me from nagging him,” Josh said. “It really was just the first few days of having cameras around us that we noticed them. Now it’s second nature for us. It’s an incredibly realistic portrayal of our lives, the lives of people making a change. We made a pretty drastic change.”

Said Brent: “He only comes up to the farm on the weekends, I’m up there full time. So we have to compress every pit of arguing and passion that we have as a couple into 24 hours. So the cameras capture that. I think every episode, people will see a bit of themselves in it because it’s a personal relationship and a professional relationship.”

So far, Josh has had to keep his day job so that’s why he’s at the farm mostly only on weekends.

The couple feels accepted by their neighbors.

“I hope that we’re a positive role model,” Josh said. “We live in a very conservative area, a very Republican area [Sharon Springs] and we’ve had actual complete acceptance. A neighbor’s a neighbor’s a neighbor. You don’t have a conservative neighbor or a liberal neighbor. You have someone who can help you when you need help and who you can help.”

The couple hopes their experiment and adventures on the farm will encourage others to follow their dreams.

“I think what is our greatest attribute is we don’t let fear hinder us from taking advantage of opportunities,” said Josh.

Added Brent: “The climate right now in America is one that people are forced to make changes in their lives. You can either make those changes out of fear or you can make those changes positively. If changes have to be made for a lot of people right now, look forward and do something you’re passionate about.”