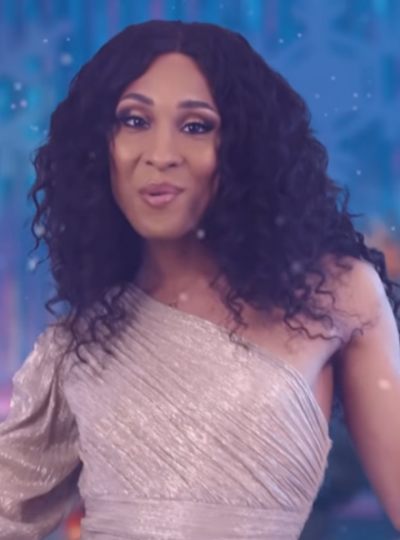 GLAAD’s Head of Talent, Anthony Allen Ramos chatted with with Mj Rodriguez who is nominated for Outstanding Lead Actress in a Drama Series for her role as Blanca in “Pose.”

Rodriguez, who made history as the first transgender woman to ever be nominated for an Emmy in a leading category, talks about the impact of this moment for the transgender community and for people of color.  As the Emmy Awards historically are watched by so many people around the world, Rodriguez also reflects on what she hopes people who tune in and see her learn and take away.

Although she says she doesn’t have an acceptance speech planned yet, she understands that if that opportunity happens, her heart will guide her in the right direction on what to say.

Mj Rodriguez on what her Emmy nomination means to her:

“I was totally surprised when I saw myself up there in that category…it was written in the stars and now actually it is true.  Now young women like myself, now the trans women who are ancestors of mine, they are smiling from above and they are rooting me on.  I am glad that I can have this moment with other women in this category!  These are really well-known women, legit actresses and I finally get to stand alongside these amazing nominees.  That does not happen for a lot of trans women in the world and now it’s going to start happening, hopefully.  I see the pendulum moving.  It is a monumental thing, it is a her-story thing, and I am here for it!

“I think as a younger person if I would have seen someone like myself (receive and Emmy nomination) I would have probably have had even more of a fire lit under me to just do what I love to do in achieve the dreams I wanted to achieve because there was someone…who looked like me.  I am a multitude of intersectionalities.  Not only am I trans, I am a black woman, I am a trans woman, I am a Latina woman…I am a woman.  If I were younger and able to see that , I am sure that not only me but other people who were like me who are part of all of those intersectionalities would say ‘I want to achieve the dream that she is achieving because she is making it happen, she has the confidence to do it.’”

Mj Rodriguez on connecting with and inspiring the younger LGBTQ generation:

“To think that there are younger ones who are looking to me for that, I am happy about it because this is my dream, I have always wanted to do this and now I am seeing that I am built for it and I am just ready to keep inspiring.”

“I love that I have been receiving so much love because that is what I am built on.  When I see that younger ones are wanting to do that, it makes me want to do it more, and I just hope that they keep following.  All of us have our moment where things come to an end…why not change minds now through positivity?”

“It is liberating…hearing it from your own community, it is just such an overwhelmingly beautiful feeling to know that you are influencing people who are inside of your community, people who are a part of the LGBTQIA community who look to you and talk to you…Now each and every last one of us who is a part of the LGBTQIA community are finally getting our chance to have space to navigate in the places that we never thought we would be able to navigate.

Mj Rodriguez on what she hopes people who watch the Emmys take away from seeing her:

“When it comes to something as big as this, there is a vast amount of people who are watching and the one thing I hope they take away from this is that there is a variety, a multitude a vast group of people who are diverse in this space.  I mentioned I am black, Latina, trans and I hope people see all of those things rounded up together…I hope the first thing that they see is that I am a human.  The reason I am in this category is not just because of my transness.  It is because I was an actress who did the work, enjoyed the work and loved the work and also knew what the message and the intent was.  It was for everyone around the world and I hope that the see that it is a human experience…It is a universal struggle for trans people specifically to go through discrimination and being dehumanized.   This moment itself will break that down possibly a little bit more.  I hope that when I get up there or when I am sitting in that chair that they see there is a human being with a heart with pumping blood through her body who can hurt and who can cry.  I hope that they can see that and look past my transness, look past the title that I hold to and see the human first.”

Mj Rodriguez on what she would say on stage if she wins:

“There are so many things that I want to say! I gotta really think about that! I am even shaking now, it makes me a little nervous to know that it could be a possibility.  All I saw for myself was possibly getting a nomination!  Even if I didn’t have a speech planned, which I don’t right now, I know that my heart will say the things that need to be said…I know that there will be a good word to come out of my heart.  I have to say something within that moment that uplifts people.”

WATCH: Billie Jean King talks with Washington Post about her new book “All In: An Autobiography”