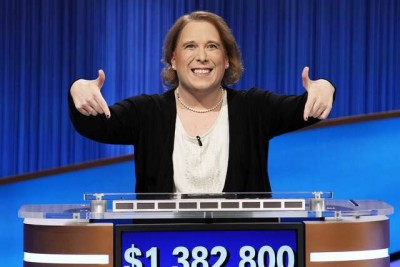 Here are some highlights:
Amy on the public’s perception of her: “I definitely was concerned about being trans in public, that can go bad for people sometimes. But once my episodes started airing I was really surprised by how overwhelmingly positive it was. There were definitely negative comments out there, and I definitely read a few more of them than I should have. But there weren’t that many, and almost everybody was just happy for me and excited for me.”

On who in media inspires her: “There really wasn’t anyone at least that I ever saw before Laverne Cox of being in a role that was a full person.”

On a “local celebrity” who inspires her: “Natasha Muse is a trans person who does stand up comedy here in the Bay Area, and I met her pretty early on when I moved here. And just seeing her being smart and funny, just a normal person with a wife and kids, it kind of showed me that being trans wasn’t a weird thing to be. And it opened up my mind to the possibility that that could be me.”

On how her transness made her a stronger contestant: “There’s some overlap between being trans and being nerdy, you kind of see that out there. I think that may be because being trans as a child I was always trying to put myself in the place of women and watch them, and see what they’re doing, and try to imagine they’re life is like. And I think that sort of projecting yourself out, you become interested in learning. Whether it’s just facts in general, or maybe getting into a certain fandom really hard, or whatever it may be, I think maybe there’s some connection right there.”

On encouragement for parents of trans children: “[I've been] hearing from a lot of parents and grandparents of trans people. … What they’ve told me, and this is what I wasn’t expecting, is that [watching me] made them feel better about their trans loved ones, that they could be out there successful. And I was like ‘wow yes, they can, and I agree!’”

On Euphoria star Hunter Schaefer: “I was lucky enough to meet Hunter Schaefer at a publicity event during the first season [of Euphoria], which was such a highlight. Seeing her in particular recently has meant a lot. Seeing her introduced, and her transness being kind of secondary, I’ve really liked the work that they’ve done with her. … [At the event] the person in front of me was another trans person who said how meaningful it was. So I just said ‘Everything that that person just said, I just want to echo that,’ and she said: ‘I’m just glad there’s some family here.’”

On an unforgettable Jeopardy! moment: “Obviously I’ll always remember the first game when I won. I think that really one of the most [memorable] was, and there were a few different, but I remember one specifically about a trans person saying that their 84 year old grandfather from watching me, had just sort of finally clicked, and was understanding to use the right pronouns and the right names for people.”

On coming out: “I’d say that one thing that was true for me at least was that I feared so many things that didn’t end up happening. And what I thought it was going to be like for the most part didn’t occur, didn’t materialize, those things I was afraid of. There’s a good chance that if you’re in that position that you’re like I am and that you’re thinking of everything that might go wrong, that might be hard. I would say, that’s not realistic, that’s not the right way to think about it, and that also there’s going to be so many unexpected things that you might get out of it. That you’re not anticipating.”

WATCH: Rafael Nadal getting ready Down Under!