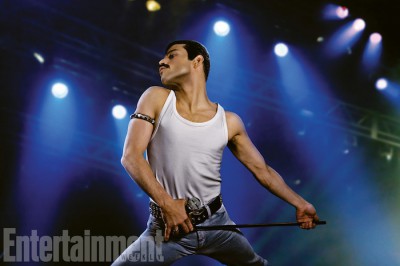 Rami Malek is well aware that there are few people in music history as recognizable as Queen frontman Freddie Mercury.

There’s not just Mercury’s face but also his four-octave voice and flamboyant physicality. So the Mr. Robot star knows it’s a tall order to be playing Mercury in the upcoming feature film Bohemian Rhapsody it hits theaters in December 2018.

The film chronicles Queen from 1970, when Mercury teamed with Brian May and Roger Taylor, until the band’s performance at Live Aid in 1985, six years before the singer died of complications from AIDS.

“When you’re able to open your eyes and see a different person staring back at you in the mirror,” Malek tells Entertainment Weekly, recalling his first time in hair and makeup, “it’s a very affirming moment.”’