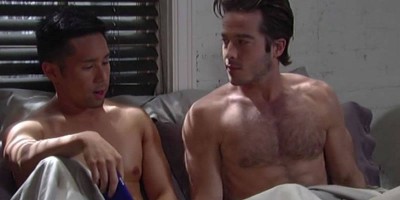 Wow. This scene between General Hospital’s Lucas and Brad is pretty hot!

They have been shown so sporadically that it’s been tough to keep up with them and post clips but if this kind of thing is happening, they have my attention!

Lucas has become a doctor again and is going to be operating a waterfront clinic so hopefully that will give him more of a regular storyline.

The couple make love then after, Brad tells Lucas what he did to him made his eyes water.

Lucas explains that he’s been watching How to Get Away With Murder!

Fans of that show will know exactly what he means.