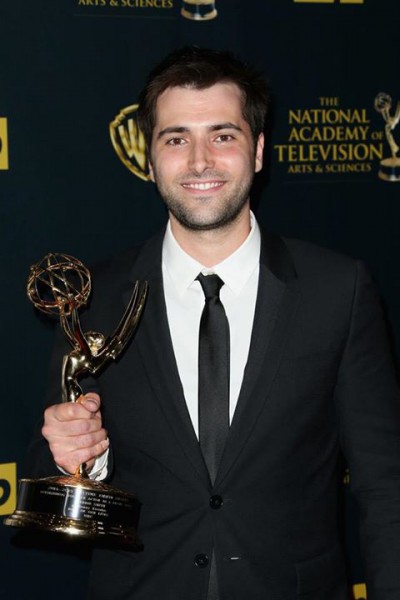 Freddie Smith won his first Emmy tonight for his portrayal of Sonny Kirirakis on Days of Our Lives.

It was a well-deserved prize as Smith has been consistently excellent in the role and grounded the character in reality no matter what writers throw his way.

I loved this part of his speech: ‘This award is for the LGBT community for showing strength and courage and being an inspiration to all of us.’

He thanked Guy Wilson who plays his on-screen husband Will Horton and Christopher Sean who plays his first love Paul Narita. Smith also thanked onscreen parents Judi Evans and Wally Kurth and his real-life parents ‘for letting your only child move out to LA and pursue his dream.’

In addition, Smith thanked ‘my beautiful girlfriend Alyssa (Tabit) – I love you with all my heart. You’re my rock.’

The couple were involved in a car accident last October in Ohio that left Tabit seriously injured. She was present at the awards ceremony and later tweeted: ‘Congratulations on your Emmy, baby! I don’t know anyone more deserving. I love you, so incredibly much!!’

Smith entered pleas of guilty to charges of felony vehicular assault and misdemeanor driving under the influence. In February, a judge suspended Smith’s driver’s license for one year and ordered him to DUI school.

Before the ceremony, Freddie confirmed for me that he has left the show – for now – after a four year run.

‘They really kept it open,’ he said. ‘It’s like family there, they were very welcoming to my coming back. The door is not shut. It’s bittersweet. It’s a great chapter in my life. I’ve loved it.’

The soap, celebrating its 50th anniversary this year, tapes 4-5 months in advance so Freddie is expected to appear on episodes through most of the summer.

His win means a gay character has won the Emmy for Best Performance By a Younger Actor with former Will Horton Chandler Massey winning in each of the past three years.