WATCH: Leslie Jordan shares how fingers can certainly be used as a measurement tool

Former VP Joe Biden at HRC dinner: “We are in a fight for America’s soul. What has become of us?” 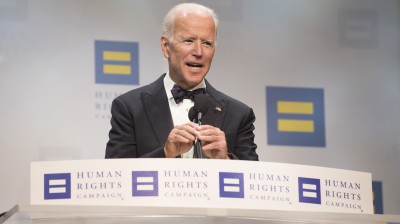 Former Vice President Joe Biden told the crowd at last night’s Human Rights Campaign national dinner in Washington D.C. that he wished he had spoken out against Trump sooner: “Barack and I agreed we would be quiet for the first year to let the new administration get up and running. God forgive me.

“Forces of intolerance remain determined to undermine and roll back the progress you have made. This time they — not you — have an ally in the White House. … Instead of using the full might of the executive branch to secure justice, dignity, and safety for all, the president uses the White House as a literal, literal bully pulpit, callously exerting his power over those who have little or none.”

Biden decided to start speaking up against Trump after Charlottesville: “This is deadly earnest, we are in a fight for America’s soul. What has become of us? Our children are listening and our silence is complicit.”

WATCH: Leslie Jordan shares how fingers can certainly be used as a measurement tool