“Fabulous Beekman Boys,” which has season finale this week, has been renewed for a second season 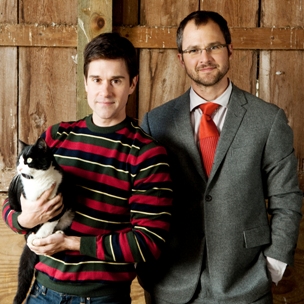 If you got hooked on The Fabulous Beekman Boys this summer, you’ll be happy to know that Planet Green has renewed the series about two gay city boys who bought an estate and farm in upstate New York and attempt to become gentlemen farmers.

Those “boys” are Josh Kilmer-Purcell and Brent Ridge and their “gay Green Acres” has become a hit! The second 10- episode season will air during the first half of 2011.

But first things first: In honor of this week’s finale airing @ 9 pm ET,  there is a Beekman marathon on Planet Green leading up to the last episode. Eps 1-9 will run starting at Noon ET and then again at 4:30 pm ET this Wednesday, August 11.

The initial season followed Josh, a best-selling author and advertising executive, and his partner, Brent, a physician and former vice president at Martha Stewart Living Omnimedia, as they left Manhattan behind for the country life at the Beekman 1802 farm.

Season two will follow them–along with viewer favorites Farmer John and Polka Spot the llama—as they juggle their relationship, along with a burgeoning home business and a rapidly expanding working farm. From raising a barn to hosting a Sotheby’s auction to shopping for sheep with Martha Stewart, season two will offer complete access to Brent and Josh’s second year at Beekman 1802.

“It’s official—Polka Spot’s 15 minutes of fame will continue in 2011,” said Laura Michalchyshyn, President and General Manager of Planet Green. “Brent and Josh both possess, huge, endearing personalities that America is falling in love with. … We can’t wait for season two.”