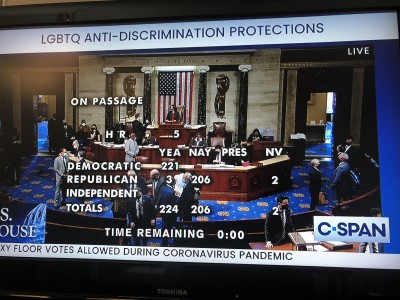 USA Today: The House of Representatives passed sweeping legislation prohibiting discrimination on the basis of sex, sexual orientation and gender identity, though it faces an uncertain future in the Senate.

Lawmakers passed the legislation on a 224-204, mostly party-line vote. Three Republicans voted with all Democrats.

The bill is one of President Joe Biden’s top legislative priorities, one he wants passed in his first 100 days in office.

The legislation amends civil rights laws including the landmark Civil Rights Act of 1964, which had banned discrimination on the basis of race, color, religion and national origin, to include protections on the basis of sex, sexual orientation and gender identity. It also would prohibit such discrimination in public places, on transportation and in government-funded programs.

Rep. David Cicilline, D-R.I., who introduced the House measure, said “every American deserves respect and dignity,” and the Equality Act, if it became law, would “ensure that LGBTQ Americans can live lives free of discrimination.”