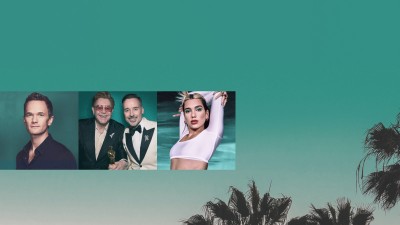 Here’s some news I think is of interest as you start to plan your Oscar night viewing.

The big night is April 25 and as with everything else during the past 12 months, things will be a little different including the annual Elton John AIDS Foundation Academy Awards Pre-Party. For the first time, Foundation supporters worldwide are invited to attend the famed Oscar party by joining a 60-minute Pre-Show Special hosted by Neil Patrick Harris alongside Sir Elton John and David Furnish, with a stripped back performance by Grammy Award-winning artist Dua Lipa. There are still other names to be announced for the event first held in 1992.

Elton says in a statement released today: “Now more than ever, we need to ensure that one pandemic does not override another, and we cannot forget the 38 million people living with HIV globally who need our care, love and support so we hope everyone joins us for this special one of a kind Oscar Pre-Party.’

With its presence across four continents, the Foundation is committed to overcome the stigma, discrimination and neglect that keeps us from ending AIDS. This year, the Foundation will raise money for young people at risk and living with HIV all over the world. This age group requires health care services and support in different ways than adults do, and the Foundation will work to ensure that services are accessible on the platforms that are best suited to these young people.

Says Furnish: “The young people affected by HIV today have already lost parents, grandparents, uncles, aunts to HIV over the past decade. Now they face the twin threats of HIV and COVID-19 for their generation. We need to prevent this catastrophe so that young people are equipped to deal with the huge challenges that lie ahead.”

Each Special per region will have the capacity to host up to 100,000 attendees through Cisco Webex. This means 400,000 supporters of the Elton John AIDS Foundation will be able to enjoy the special.

Fans can purchase tickets to the Oscar Pre-Show special for $19.99 via Ticketmaster at https://shops.ticketmasterpartners.com/elton-john-aids-foundation. Please visit www.eltonjohnaidsfoundation.org for additional information.