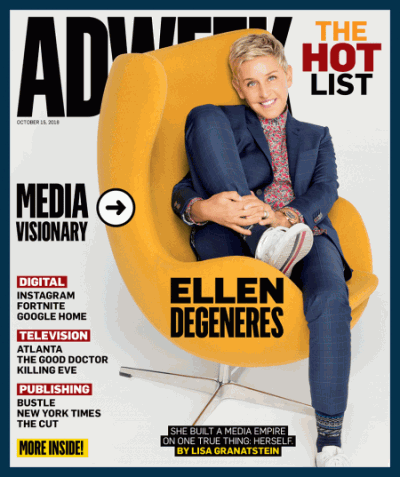 Ellen DeGeneres has done an in-depth interview with Adweek. Here are some excerpts:

On her 1997 coming out: I knew there would be people that didn’t like it, but I didn’t realize my show would be canceled. I just thought, “It’s going to be interesting.”

We’re living in a time now, the more controversial something is, the more popular it is. I just didn’t happen to have a show on at that time. The last season we did was a great season, and unfortunately nobody saw it because it was not advertised. It was purposely not advertised by ABC and Disney because they just wanted to hold their hands up to advertisers and say we’re not promoting it, we’re not doing this. And I get it. It’s a business, and I understand that. And so everybody had their reasons, and unfortunately I was just blindsided.

When I came out, I had death threats and there was a bomb threat, but they misjudged the time of the taping. We had already finished, and thank God.

Her attitude during talk show tapings: When I step through those doors, these people are so happy to be there. I feel that energy, and I get their energy, and then I have to match it because that’s what my job is. A woman came up to me last Saturday in a restaurant. She was an older woman, and she saw me and her eyes got so wide and she put her hand on my arm and she just started crying. She said, “You have to know what you do for people. My husband died, and you got me through it. You have to keep doing what you’re doing.” I look at that audience—each one of these people has a story. That’s the one hour a day that I’m not thinking about my feelings. I’m only thinking about how can I fulfill this hour of what they had hoped for. I don’t think about myself. I don’t think about the problems of the world. I want them to not think about it. I want this to be an escape for everybody.

On returning to comedy for Netflix special: I did it because I wanted to scare myself. That’s why I hosted the Oscars, and even though the first time I said I wasn’t going to do it again, I did it again because I wanted to scare myself. The [talk] show is fun, but it’s definitely not as challenging, because it’s something that’s really become so comfortable. I just wanted to do something that was going to challenge me creatively. I hadn’t done stand-up in 15 years at all—like, zero—and it’s a whole different thing. The jokes that I tell in my monologues are jokes, but what I’m doing onstage feels a little more personal. It was fun, and it was scary and it was everything that I wanted it to be. But it came back so easily to me. It was as if I had taken a week off.