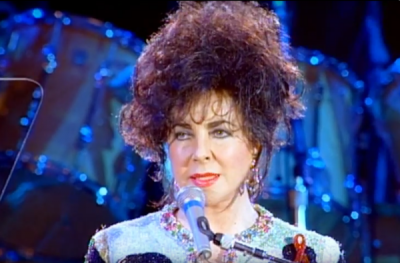 In the last 27 years of her epic life, the movie legend Elizabeth Taylor used her immense fame to fight against AIDS.

That’s why she will always be my queen.

Miss Taylor, who died in 2011, proves to still be a compelling voice in that fight in a new public service announcement unveiled this week by GLAAD and The Elizabeth Taylor AIDS Foundation.

The two-time Oscar winner and recipient of a special Oscar for her humanitarian work is seen giving a powerful speech at Wembley Stadium in 1992 at a tribute to Queen frontman Freddie Mercury who had died the year before from complications due to AIDS.

The footage of Taylor is featured along with new spots from such stars as Whoopi Goldberg, Jonathan Groff and Bebe Neuwirth, among others.

Groff says: ‘Today we have the tools to make HIV history’ and Neuwirth adds: ‘Let’s finish what we started.’

GLAAD says the spot is designed to ‘inspire, inform, and reignite the passion and action needed to beat the HIV and AIDS epidemic once and for all.’