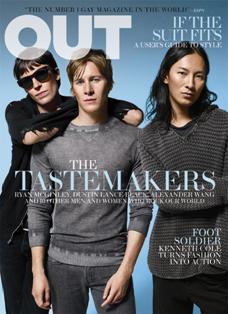 Finally got around to reading the entire article on Dustin Lance Black who is among those profiled The Tastemakers issue of OUT Magazine.

The interview took place in his Tudor style house in Hollywood where his two Writers Guild of America awards decorate the living room.

So where is that Oscar he won in 2009 for writing the screenplay for Milk?

“Oscar is with mom,” Lance says. “It brings her a lot of joy. It felt right. I didn’t want to see the Oscar and think, OK, I’ve done that. I’m too young to feel like that., and I want to keep challenging myself and taking on risky projects.”

We also learn in the article that Lance recently broke up with his boyfriend of 2.5 years and doesn’t find the bachelor life very appealing.

He adds: “I want kids. I have a room upstairs that’s getting twin beds put in. If you build it, they will come!”