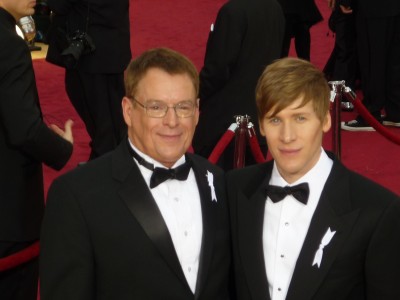 One of the highlights of a very busy awards season was seeing the emergence of “Milk” screenwriter Dustin Lance Black. (This is a photo I took of Lance and Cleve Jones on the red carpet at the Oscars last week).

I interviewed Lance on his very first red carpet back in November at the Hollywood Film Festival Awards then a few months later at the Directors Guild of America Awards where he showed up to support Gus Van Sant. Just two days later, I saw him again at the Oscar Nominees Luncheon and then at a private party for “Milk” at Nobu the week before the Academy Awards where I chatted with Lance and Cleve Jones. In the YouTube video above at the 1:06 mark, I ask Lance a question shortly after he won the Academy Award for best original screenplay.