Totally Random Video: Meryl Streep and Shirley MacLaine are magic in “Postcards from the Edge”

Drag icon RuPaul speaks out and claims: ‘I’d rather have an enema than have an Emmy’ 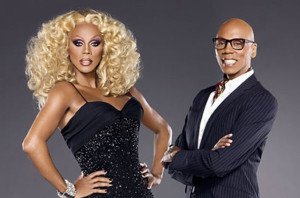 All it took was for RuPaul to be asked about Lip Sync Battle which was inspired by a wildly popular segment on Jimmy Fallon’s Tonight Show.

The drag icon calls it ‘a poor ripoff’ of RuPaul’s Drag Race and goes on to say: ‘Regular, straight pop culture has liberally lifted things from gay culture as long as I can remember. And that’s fine, because guess what? We have so much more where that comes from. Take it!’

RuPaul, 55, is known for being outspoken but may have reached new levels of candor in a new interview with Vulture published this week.

‘… We’re showing these bitches how it’s really done. But it’s funny how that works, even in gay culture. There’s a certain “gay shame.” Gay people will accept a straight pop star over a gay pop star, or they will accept a straight version of a gay thing, because there’s still so much self-loathing, you know?

‘They talk so much about acceptance now today and it’s like, yes, but trust me — I’m old and I know this shit — it’s superficial. Because as soon as the lights go out, you’ll see how advanced people’s thinking is. This so-called “Will & Grace acceptance” era is just people fucking posing. Things haven’t changed that much. You see it in politics right now — that’s the fucking truth of people. And you know, people will have you think, “Oh, we’re fashion. We’re gay. That’s my gay over there!” It’s like, no. We’re still a very, very, very primitive culture.’

Despite mainstream culture taking from it, RuPaul does not believe drag will ever be mainstream itself and points out that he has never been asked to guest on The Tonight Show, David Letterman’s show or even The Ellen DeGeneres Show.

But he insists he’s made peace with that.

‘I made a pact with myself when I was 15 that if I was going to live this life, I’m only going to do it on my terms, and I’m only going to do it if I’m putting my middle finger up at society the whole time,’ he says. ‘So any time I’ve had yearnings to go, “Aw, gee, I wish I could be invited to the Emmys,” I say, Ru, Ru, remember the pact you made. You never wanted to be a part of that bullshit. In fact, I’d rather have an enema than have an Emmy.’

Totally Random Video: Meryl Streep and Shirley MacLaine are magic in “Postcards from the Edge”