Doris Day on Rock Hudson: ‘He was one of the funniest men I’ve ever known – and the nicest’ 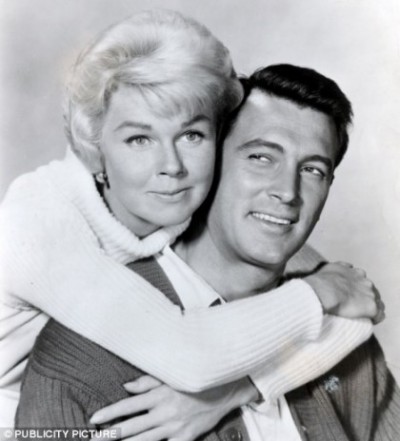 Turner Classic Movies is paying tribute to Rock Hudson this month and to help kick things off, his great friend and co-star Doris Day has participated in a wonderful video tribute.

She just turned 90 and sounds terrific.

Miss Day still grows emotional when talking about Hudson, her co-star in three romantic comedies including the 1959 smash Pillow Talk.

‘The world lost a talented actor and a fine human being when he passed away,’ she says.

The actress gets choked up a bit and adds: ‘I lost one of my dearest friends and I still miss him so much.’

‘He was one of the funniest men I’ve ever known – and the nicest.’

The popular movie pair also starred in the early 1960s films Send Me No Flowers and Lover Come Back.

‘He was the very epitome of a true movie star with his good looks, athletic build and winning personality,’ Miss Day says. ‘Rock lit up the screen.’

They had not met until signed to star in Pillow Talk but their friendship was instant and lasted until Hudson’s death.

Even when they weren’t appearing in the same movie, Day says Hudson would often visit her on a set and they would enjoy ‘the wonderful friendship we were blessed with.’

‘We became friends from our very first meeting and he remained a dear part of my family all of his life.’

They were so close that even as Hudson, a closeted gay man throughout his career, kept a commitment to appear with Day to launch her new talk show in 1985 – the last year of his life.

Hudson was dying of AIDS and his ravaged appearance that July shocked the public. He was dead by October, six weeks shy of his 60th birthday.