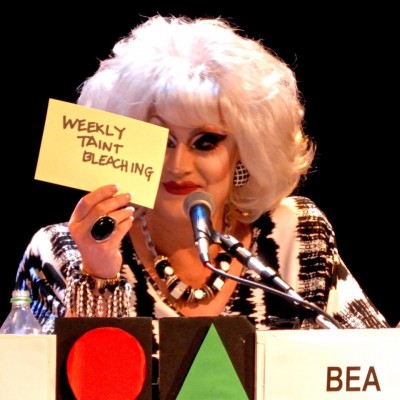 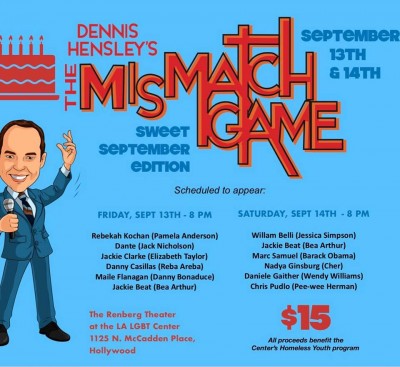 I have friends visiting from out of town this weekend and know that making Dennis Hensley’s The MisMatch Game a part of our Saturday night will be all kinds of fun.  I can’t wait to see their reaction to the great Jackie Beat as Bea Arthur!

The side-splitting parody of the ‘70s game show has set the rafters ringing with laughter since its debut in 2004. The LA Times has called it “witty, ribald … an adventure in surrealist era bending.”

Creator, producer, and host Dennis “Gene Rayburn” Hensley will again be joined onstage by a panel of some LA’s most creative, hilarious, and demented minds. Hensley and company are once again generously donating the proceeds to benefit the Center’s array of free and low-cost services. Since its debut in 2004, The MisMatch Game has raised well over $140,000 for the Center. With kitschy prizes for volunteer contestants pulled from the audience, it’s time to dig out that leisure suit for another run of the perennial cult favorite.

The MisMatch Game regularly fills the house at its irregularly scheduled gigs at the Renberg Theatre. Audiences keep coming back for the razor’s edge improv and the racy, anarchic, and decidedly un-PC wit and wildness. The Advocate honored The MisMatch Game with a “10 Best Theatre” citation that said, “This recurring Los Angeles happening re-imagines the ‘70s TV game show The Match Game with full-camp press and excellent sub-lebrity impersonations.”

General admission tickets are $15 and may be purchased online at lalgbtcenter.org/theatre or by phone at 323-860-7300. The Los Angeles LGBT Center’s Renberg Theatre is located at 1125 N. McCadden Place (one block east of Highland, just north of Santa Monica Boulevard) in Hollywood 90038.