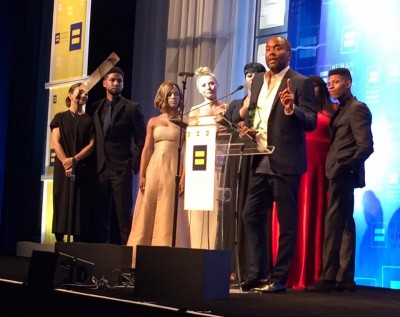 Republican presidential hopeful Donald Trump spent part of his day Saturday campaigning in Arizona. But for many at the Human Rights Campaign gala going on in Los Angeles, that was just too close for comfort.

‘He’s taking over – he’s coming in to take us all down,’ Empire creator-producer Lee Daniels told the crowd at the JW Marriott/Ritz Carlton hotel in downtown Los Angeles. ‘This is serious business. … make sure (Hillary) Clinton is in that f—–g office.’

The smash Fox TV show was among the night’s honorees.

Prior to Daniels taking the microphone, the Empire’s executive producer Ilene Chaiken said: ‘We are facing some of the ugliest, darkest politics of my lifetime … it’s clear our fight is far from over.’

Trump, his presidential rival US Senator Ted Cruz and the same-sex marriage backlash in the form of so-called ‘religious freedom’ bills were a recurring themes during the star-studded evening to raise money for HRC, the largest civil rights organization fighting for LGBT equality in the US. 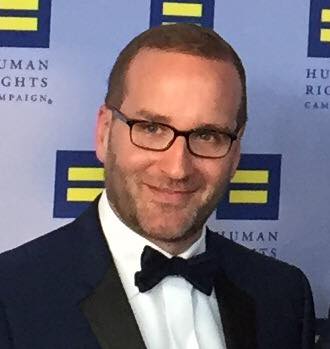 ‘Republican candidates for president are living in the dark ages,’ said HRC President Chad Griffin (pictured, left) who was the first to say Trump’s name from the stage – a name that elicited loud boos.

‘In 2016, some of the Republican candidates think being LGBT is a lifestyle choice. We’ve come too far, fought too hard to allow these politicians to play with our rights. … Everything we’ve fought for is on the line in this election.’

In addition to Empire, lesbian producer Nina Jacobson (Hunger Games franchise) was honored and Jim Obergefell, the lead plaintiff in the US Supreme Court case that led to same-sex marriage in all 50 states also spoke. 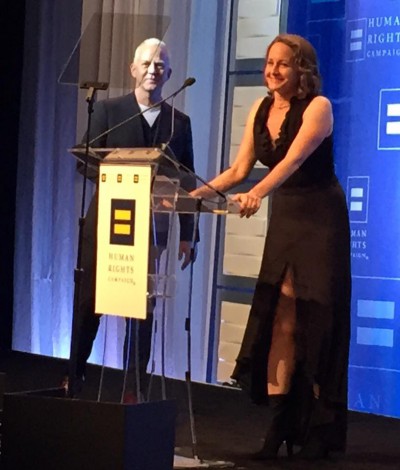 Jacobson (pictured, right, with presenter Ryan Murphy) noted that because of Trump’s surge, ‘bigots are the ones coming out of the closet all across the country’ and that ‘there’s every reason to believe his followers hate us as much as they hate’ racial minority groups.

Jacobon added: ‘If there was ever a time to be a badass, militant lesbian, it’s right now.’

Obergefell said that same-sex marriage becoming legal nationwide last June made the country better but laments the backlash since then.

‘Bathroom bills, religious refusal bills … they have nothing to do with the Golden Rule. … I don’t know about you but I’ve had it. I’ve had it with all the hatred and division that seems to rule out country,” he said. ‘We didn’t fight so hard to let these bigots win.’

Griffin pointed out that there are currently 190 anti-LGBTI bills under consideration across the US including one that last week passed the Georgia legislature ‘in the dark of night.’

House Bill 757, if signed into law by Governor Nathan Deal, would allow pastors in the state to not perform same-sex weddings if that makes them uncomfortable.

It also would give faith-based organizations in the state the option of refusing services to anyone they find ‘objectionable’ or to not hire or retain employees.

Noting that the National Football League has vowed to not have any Super Bowls in the state if the law passes, Griffin called on the movie and television industries to boycott doing any filming in the state.