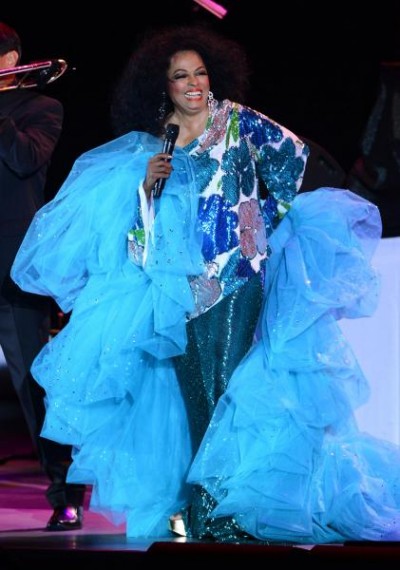 At 69, Diana Ross doesn’t dance and run around the stage the way that she used to and has the costume changes down to about three or four.

But that marvelous voice and larger-than-life stage presence is still intact as the crowd at last night’s sold out concert at The Hollywood Bowl was happy to discover.

We were in the cheap seats way in the back at The Bowl – a completely new experience for me. Back where we sat, people did not hold back – there was unabashed dancing and singing from the first number to the last and a wonderful camaraderie that seemed to instantly develop.

One of my favorite moments from last night was when my friend, David Trudell, leaped up and started dancing to Diana’s classic disco hit The Boss – pointing his finger at the lady in the row in front of us who was also dancing and had been channeling Miss Ross from the very first number.

We all did the Supremes choreography during Stop! In the Name of Love and boogied during Love Hangover, Take Me Higher, I Will Survive and Upside Down.

Other Supremes hits performed last night were Love Child, Where Did Our Love Go, You Can’t Hurry Love, My World is Empty Without You and Baby Love. 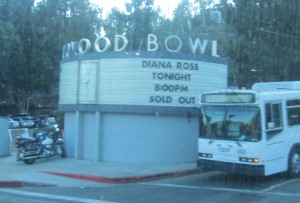 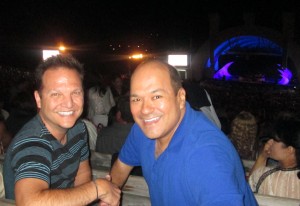 A real highlight of the show was Ain’t No Mountain High Enough, Miss Ross’s first number one hit as a solo artist. She also performed her next solo number ones: Touch Me in the Morning and Theme From Mahogany.

She did a beautiful Don’t Explain from Lady Sings the Blues but did not perform the sublime Good Morning Heartache.

When you have as many hits as Miss Ross, there is not time to do them all. The group of women in front of us were waiting to hear Muscles and I had to tell them she has not done song that in concert in years.

She also long ago stopped doing Reach Out and Touch during which she would wade into the audience and have some real touchy feely moments. These days Miss Ross doesn’t talk much to the audience except when introducing band members.

But we were surprised she did not perform the big hit ballads Missing You, It’s My Turn or Endless Love or the dance song Chain Reaction which she used to open concerts with at one point.

The show was a family affair with the star’s actress daughter, Tracee Ellis Ross, serving as a charming and funny hostess. She introduced the opening act which was her sister, Rhonda Ross as well as her brother, Evan Ross.

Both are talented and solid but nowhere near as unique or charismatic as their famous mom who, let’s face it, is one of a kind.