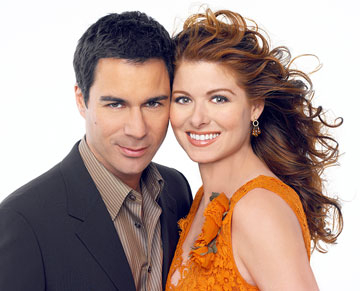 Will & Grace didn’t want to be in your face when it premiered back in 1998 – a year after Ellen DeGeneres came out and more than a decade before the premiere of Modern Family.

As the Wicked Witch of the West says in The Wizard of Oz, “these things must be handled deeeelicately.’

Debra Messing remembers that the subject of Will’s sexuality had to be introduced delicately.

‘I remember that the opening scene of the pilot where Will and I are on the phone talking about George Clooney on ER and how we both found him handsome. The way it was written was so subtle that they did testing afterwards and half the audience didn’t realize at the end of the pilot that Will was gay,’ Messing tells HuffPost Live.

She adds: ‘And that was considered a good thing for the show.’

Messing goes on to explain: ‘They wanted the show to have legs and they knew they would have to capture the audience’s heart through the laughter first.’

Will’s sexuality was soon apparent as was that of his far more flamboyant gay pal Jack (Sean Hayes).

At first, Messing says, ‘we got just as many letters of hate as we did of love. But the beautiful thing is that the scales tipped very quickly.’

The show went on to run for eight seasons and won Emmys for Messing. McCormack, Hayes and two for their co-star Megan Mullally.