Days of Our Lives: Nick apologizes to Sonny who remains determined to bring him down 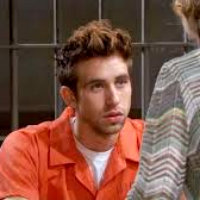 Nick decides it’s time he apologizes to Sonny for calling him a faggot saying it’s ‘a word that I never, ever use and I’m sorry.’

Sonny (played by Freddie Smith) has been given more teeth lately and it’s been an appealing change. His loyalty to Will and his determination to be there for his boyfriend has added a nice layer to the character and to the performance.

I love when Will, Sami and EJ are plotting against Nick and EJ says they just have to find some dirt on him that will give Gaby pause.

An incredulous Sonny says: ‘She already knows he went to prison for killing a guy. And she’s fine with that!’