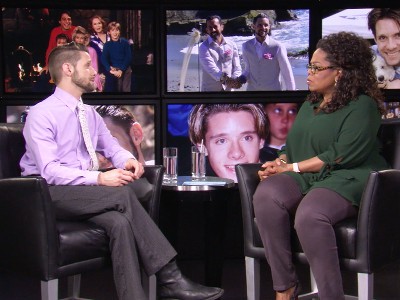 Danny Pintauro of Who’s the Boss fame appeared on Oprah Winfrey’s Where Are They Now? series on OWN this weekend and revealed that he is HIV-positive.

Danny, 39, believes he was infected in 2003 while mixing sex and crystal meth and is speaking out now because he believes too many in the gay community are still engaging in this risky combination.

“I am speaking out because I want everyone who continues to ‘tweak’ and party to know that it is not worth the price,” Danny tells People.com. “I want my community to wake up, stop being complacent and start taking care of each other. We need to be the best we can – safe and healthy.”

Danny grew up in front of the world in the 1980s and came out publicly in 1997 after the National Enquirer threatened to do it for him.

Growing up when AIDS was a death sentence, Danny says he practiced safe sex and always did condom checks.

But when he began using crystal meth,he says his immune system was quickly shot.

“Having done it for multiple hours, or perhaps I had been doing it for a day or two or maybe over the last couple of weeks off and on, my immune system wasn’t recovering, and I was so much more susceptible to anything that came my way,” he says. “This guy was not on HIV medications, so his viral load was through the roof, I’m sure – especially because he’s doing a lot of drugs and not taking care of himself – so those factors combined to still find a way to have me contract HIV.”

“And that’s the really scary part,” he adds, “because you can do everything you think you need to do to take care of yourself, but because of what meth does to your brain and to your body, no matter how hard you try, you’re still opening yourself up to those possibilities – whatever STI you can think of, it’s so much more prevalent than you’re going to pick that up.”

The risk is even greater for people who are less vigilant about protection: “The meth forces you to lose your inhibitions, so of course you’re going to say, ‘Oh, I don’t need to use a condom,’ or, ‘I’ll be fine this time’ because you’re lost in it. It’s no good, no good.”