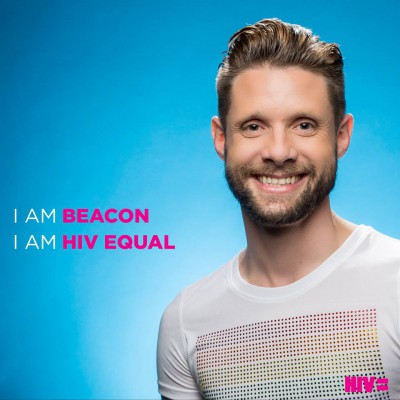 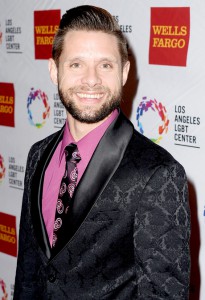 It’s been a dizzying few months for Who’s the Boss alum Danny Pintauro.

The former child star, now 39, made a return to limelight in late September when he revealed to Oprah Winfrey on television that he is HIV positive and had overcome an addiction to crystal meth.

Since then, it’s been a series of television interviews, appearances at LGBTI benefits and a whirlwind of online activity including reacting to Charlie Sheen’s revelation that he is also HIV positive.

Pintauro and I chatted at two recent events: The Halloweenie party benefiting the Gay Men’s Chorus of LA and the Los Angeles LGBT Center’s recent gala. By his side at both events and through it all has been husband Wil Tabares who he married last year.

‘I am thankful for my husband. If I didn’t have him to get me through these past weeks, I don’t know what I would have done,’ Danny told me recently. ‘There have been a lot of moments and having him there to ground me and to remind me there are 500 emails from people saying how thankful they are, I’m so thankful.’

From 1984-92, he played Judith Light’s son and Alyssa Milano’s brother on the ABC sitcom Who’s the Boss which also starred Tony Danza.

But he had long ago left acting behind, graduated from Stanford University and came out publicly as a gay man in 1997 when a tabloid threatened to do it anyway. He had been living a fairly anonymous life as a restaurant manager in Las Vegas when the Winfrey interview aired and he went public about his HIV status.

‘I was kind of worried that it would be a blip and no one would really care and the lady at the grocery store would go: “Oh! That’s Danny Pintauro and he’s got HIV,” he admits. ‘I did not expect it to be this big. But thanks to The View, they really sort of upped the ante because they got people really mad in a good way. After that, it really exploded.’ 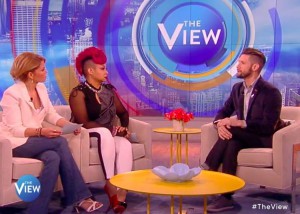 Just a week after the Winfrey interview aired, Danny was booked onto the ABC chatfest and producers assigned two fellow former child stars to do the interview: Candance Cameron Bure (Full House) and Raven-Symone (The Cosby Show, That’s So Raven).

With Tabares in the audience, Symone got very personal at one point when she asked Danny if he and his husband practice safe sex. Tabares is HIV-negative.

Danny replied in part: ‘Have we always been 100 percent safe? No. But I’m undetectable. And that means it’s really hard for me to give it to him.’

Cameron Bure then read this statement: ‘If you are HIV positive and still having unprotected sex regardless of what anti-viral drug percentages that you’re using, you’re still not keeping your partner 100% safe.

Danny interjected: ‘Oh, of course not! There is always a risk.’

Says Danny of the infamous interview: ‘I got to talk to them beforehand and it’s funny because we all seemed a little nervous because I think they knew what was coming in terms of the questions. It was definitely that interesting moment of, ‘Wow, it’s good to see you, I haven’t seen you in forever’ and ‘I’m really sorry about what I’m about to ask you.’ It just seemed like that kind of vibe.’

Far more positive has been the recent interactions he has had with Who’s the Boss castmates Light, Danza and Milano. 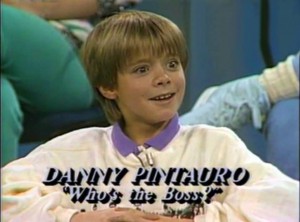 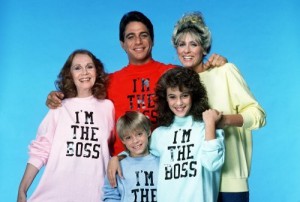 Earlier this month in New York City, Danny said he had a real ‘life moment kind of a day’ that involved reunions with light and Danza on the same day.

‘I went and saw Judith (Light) in her play Thérèse Raquin on Broadway. Just seeing her and connecting with her. It’s the first time I’d seen her since all this information came out. We got to have a really nice moment and a hug and love and all of that.

‘Then, cut to five hours later and Tony Danza is presenting me with an award (at the AID FOR AIDS ‘My Hero Gala’). It was literally like one of those life moments. It was just awesome. I think it was just as good of a thing for me as it was for Tony – for people to know that he’s supportive and he’s on board is super important. I want people to know how supportive he is because he doesn’t talk about it.’

While Danny had maintained some contact with Light and Danza over the years, he and Milano had long ago lost touch.

But that changed after the saw his interview with Winfrey and reacted to it emotionally when asked about Pintauro a few days later while guest hosting The Talk.

‘After that The Talk interview, it was like the floodgates opened and we’ve just been really solid since then. I don’t think we ever disliked each other or hate each other – there was none of that. It was like someone from college who you hung out with all the time and really loved and 10 years have gone by and you’re like, “I don’t know what’s happening with them.When they find out something serious is happening to you, I think that changes the game a lot.’