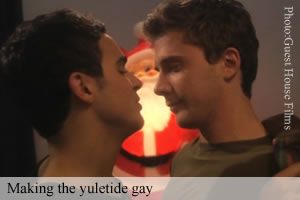 I think one of the more popular films of Outfest 2009, which kicks off a 10-day run on Thursday, will be Make the Yuletide Gay.
Written and directed by Rob Williams, the movie is about an out-and-proud gay college student (Kieth Jordan) who crawls back into the closet to survive the holidays with his family. His quirky Midwestern-hearted parents (Kelly Keaton and Derek Long) try to set him up with his high school sweetheart, Abby (Hallee Hirsch).
But when his boyfriend, Nathan (Adamo Ruggiero), shows up at their doorstep unannounced, he puts on a charade to keep the relationship a secret but pressure starts to mount!
I chatted with Rob Williams recently about the movie which screens at 7:15 p.m. on Tuesday, July 14 at Fairfax 1 and at noon on Saturday, July 18 at Fairfax 1.

“We’re having  Christmas in July this year because I think people need a little holiday spirit right now with everything that’s going on in the world,” Rob joked. “They need to laugh, they need some Christmas presents and for Santa to slide down the chimney.”

With so much to do this summer, I asked Rob why people should go to see his movie.

“It’s just a lot of fun and it gives you an excuse to laugh and for a lot of people, a chance to look back at their coming out experience and coming out to their parents,” he said. “This is a funny look at that experience and something we can all relate to. In this movie, these are the parents you want to have.”

Will there be a sequel?

“”This movie ends where you want a sequel so we hope so,” he said. “Actually I think it’s going to make a perfect trilogy: Make the Yuletide Gay, Don We Now Our Gay Apparel and It’s a Fabulous Life. Everyone who wants to fund that trilogy let me know!”

Below is the film’s trailer and some stills that include shots of some of my faves: Alison Amgrim is in the top pic (remember her from Little House on the Prairie?) and Steve Callahan in the bottom pic has a small role as a college professor.