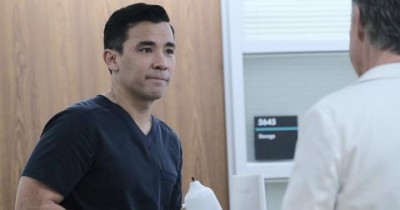 After all those years playing Oliver on How to Get Away With Murder, it takes a bit of an adjustment to seeing Conrad Ricamora in a different TV role so quickly.

On the Fox medical drama The Resident, plastic surgeon Jake Wong (Conrad Ricamora) has been growing closer to his former stepfather, hospital CEO Randolph Bell (Bruce Greenwood), Jake and his husband Gregg (Christopher J. Hanke) were set to adopt a baby born in the hospital when the young woman’s conservative parents arrived and issued an ultimatum: They would continue to support their daughter financially only if she gave the baby up for adoption to a straight couple.

Ricamora tells Entertainment Weekly that he hopes the episode will bring awareness of how this happens to gay couples in real life.

“A lot of LGBTQ couples don’t have adoption rights in certain states and the child can be taken away,” he says. “I hope it helps bring awareness that this happens way too often. I also hope the episode shows what Bell says is very true: A child needs love and support and the presence of two willing parents.”

He continues: “I remember when my stepmom married my dad, she was always talking about choice. For gay parents, it’s a choice made over several years to have a child. You continually have to put in resources before you can even adopt a child or work through surrogacy. This means there’s a big commitment involved, which is what a kid needs — committed parents. There are so many LGBTQ couples who are committed to showing a child love and support that still have to face so many more hurdles that are discriminatory. I hope we can let go of some of that and really embrace the idea that commitment is more important than the sexual orientation or identification of the parents is.”