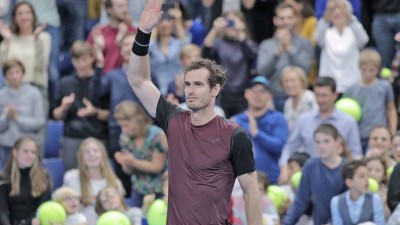 So happy for Andy Murray who scored a 3-6, 6-4, 6-4 victory over old rival Stan Wawrinka in the final of the European Open in Antwerp.

It was his first tournament victory since early 2017 when he was the number one ranked player in the world. Since then, he struggled with hip problems that required two surgeries, long stretches away from the game, and fear that his career might be over.

It is not and after the win, Murray was in tears.

“I don’t know why you get emotional about certain things or the reason for why it comes. Everyone is different,” he said. “It was because the past few years have been hard for me and tennis is something that I love doing and today was unexpected and yeah, there’s lots of reasons for me to be emotional today.”

Wawrinka has come back from injuries of his own the past few years. These are the only two players in the past 15 years or so who have managed to carve out Hall of Fame careers for themselves during the nearly unshakable dominance of Roger Federer, Rafael Nadal, and Novak Djokovic who have won 20, 19, and 16 grand slam singles titles respectively.

Wawrinka has won the Australian Open, the French Open, and the US Open while Murray is a two-time Wimbledon champ, two-time Olympic gold medalist in singles, a US Open champion, and is the only one besides the “big three” to be ranked number one since 2004.