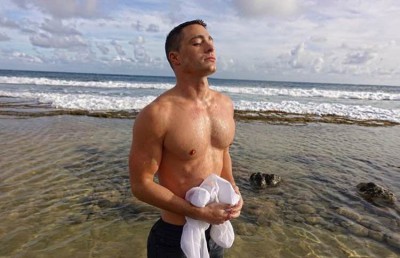 Not long after Colton Haynes went public about being a gay man last year, he also opened up about his struggles with anxiety.

He revealed he’d suffered all his life sometimes becoming physically ill and fainting. His struggles led him to dial down his career for a time including giving up regular roles on the shows Teen Wolf and Arrow.

This week he’s done a short video for Child Mind Institute sharing what he’s learned and what he would tell his younger self about his struggles with mental health.

‘Some advice I would give to myself when I was younger – especially about anxiety – would be that it’s okay to be anxious. Also a really good way to help yourself get over anxiety is to tell yourself that you’re excited  instead of that you’re anxious. Because if you’re excited it’s almost the same feeling but obviously without the panic part.’

He also says: ‘Really, you’re not alone. I think that’s really something that I’ve learned in my recovery process with anxiety has been there’s millions of people out there who suffer from crippling anxiety. Whether it be from fainting or sweating or so many different ailments from anxiety. It gets so much better once you’re able to learn the tools to cope with it.’

Some suggestions: ‘Sometimes just having a dance party can really, really, really help with anxiety or just breathing in for seven and out for 11.’

He adds: ‘Just know that you’re not alone and that it’s all going to be okay.’