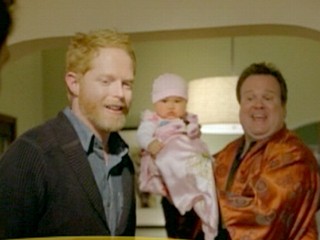 This is something I’d expect to see on maybe Fox News if anywhere, not on CNN which should know better: Towleroad.com reports that CNN’s Showbiz Tonight conducted a poll asking: Is the surge in TV gay characters bad for society?

Are you kidding me? And even scarier are that 44 percent of the respondents said: “Yes.”

Why not just go ahead and ask: Are gays bad for society? Really that’s what they are asking anyway.

This kind if thing is so infuriating especially with today being World Suicide Prevention Day. Far too many gay kids kill themselves or want to kill themselves because of the attitudes of that 44 percent who said yes – some of whom are parents of gay kids.

Thank GOD we have shows like Glee where a gay kid like Kurt has a supportive and loving father and shows like Modern Family where a gay couple are raising a child and as normal a part of their family and neighborhood as anyone else.

It makes me wonder if CNN’s Showbiz Tonight has a gay person on staff who might have been able to say, “You know what guys, that poll is so inappropriate.” This is why I made my point a few days ago about newsroom diversity and why it is so great to have an out newsman like Thomas Roberts working at MSNBC.

We have to expect better from a major news organization like CNN and I expect GLAAD to get on their case immediately over this. There should be an on-air apology to all gays and their straight allies. This kind of thing is ridiculous in this day and age.

UPDATE: CNN has removed the offensive poll at the urging of GLAAD. See details HERE