Chaz Bono’s message on Transgender Day of Visibility: “Get to know one of us, ask to hear our story” 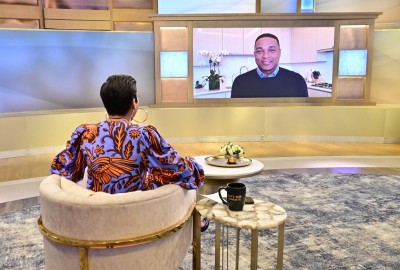 CNN Anchor Don Lemon appeared on Tamron Hall’s talk show yesterday to discuss healing after the tragic loss of his sister, finding love in his 50s and discussing racism with friends. Lemon also revealed for the first time on the live show that he and his fiancé are looking to start a family through adoption or surrogacy in the coming years.

Lemon on why his fiancé Tim [Malone] is the right person for him and why he thought he would never be able to marry:
“It was just the right person…I just found the right person, the person who believes in unconditional love, who believes in the challenges, going through the challenges, weathering the storms of a relationship because relationships aren’t easy and I don’t think they’re supposed to be easy. Someone who really believes in family, and I decided you know I need to lean into my life because I grew up never thinking that I’d be able to be open about who I was in love with and about my love life and my relationship. I actually grew up thinking that I would never get married, or it will just be a roommate, you know, or I could never tell my family or be honest with the public about it. And then once same sex marriage passed, I said, you know, why not, why not get married? Why not, you know, fall in love and have all the happiness that everybody else is entitled to and so that’s where I am right now. I’m just trying to be happy, and do the right thing in life and love someone and start a family.”

Lemon on looking to start a family:
“Yes, I’m thinking about starting a family. Listen, we got to get married first. And we’re waiting for COVID to be over to do that because I just don’t think it’s a good time to get married do it during COVID. Now we want to be able to celebrate with our friends, we want to be able to celebrate safely. But yeah so we’re thinking about, do we want to adopt, do we want to go through surrogacy, how we want to do it. Tim is definitely going to have to be the one that to have the kid because he’s younger his body will bounce back.”

Lemon on his path to healing after the death of his sister:
“It wasn’t easy and even now, it’s still hard to talk about, as you know you never really get over it, you just learn to deal with it, it becomes part of your life. And, you know, the weird thing is now, Tim always says no one ever sees you go through this stuff, I’m the only one who sees it. You know sometimes, still now, I wake up in the middle of the night crying or it’ll just hit me at the wrong time. I’ll be on an airplane or I’ll be just walking around or I’ll be in the gym or sometimes I’ll be on the air, and I’ll think about my sister and pick up, you know, pull up a picture of her. She was my mentor growing up, and you as you know, moving around the country you become a sort of a gypsy right from city to city because you’re trying to get to a certain level. So you know I wasn’t as close to my family, my sister in later years as I would want to just because, meaning proximity not as close, I love them. And so I didn’t get to see them as often as I would’ve like and then there was some guilt around that I don’t know if you felt that because you, you know you miss a lot of holidays and birthdays and anniversaries because you’re away pursuing your dream.”

Lemon on realizing the he still had a lot of pain to work through following the death of his sister:
“It was so tough. I didn’t realize just how hurt I still was because I was trying to read the audio for the book, I had to stop. That was the longest day ever, trying to get through the parts where I had to read about my sister. And I just kept reliving and reliving and I just said I got to stop, I can’t do it. So if you listen to the audio of the book, you’ll hear me get emotional, and there was a lot of editing, and that was the longest part. That helped show me how hurt I was and that how much more I had to deal with”

Chaz Bono’s message on Transgender Day of Visibility: “Get to know one of us, ask to hear our story”

Stefano Tsistipas is soaked in Miami!

WATCH: Andy Cohen on his new series about reality shows and his “lingering kiss” with Jeff Lewis