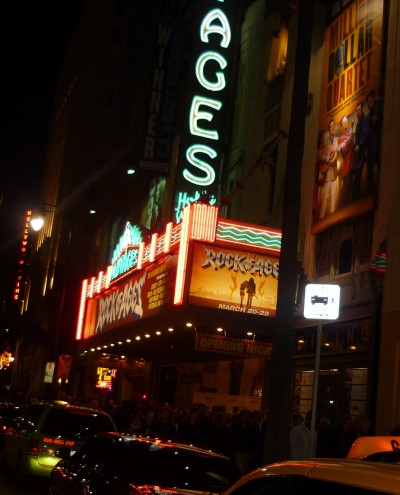 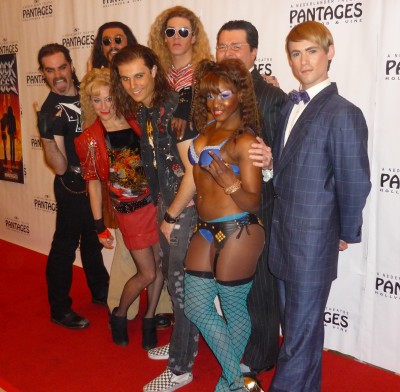 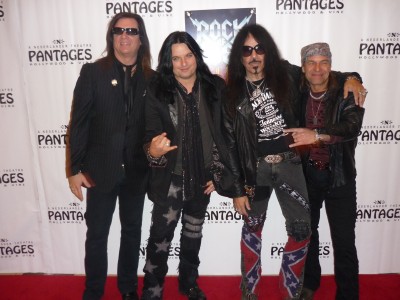 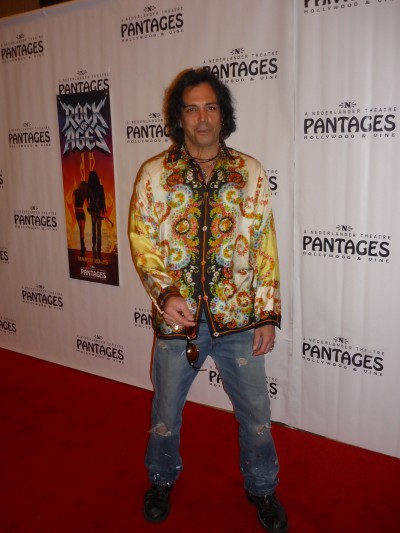 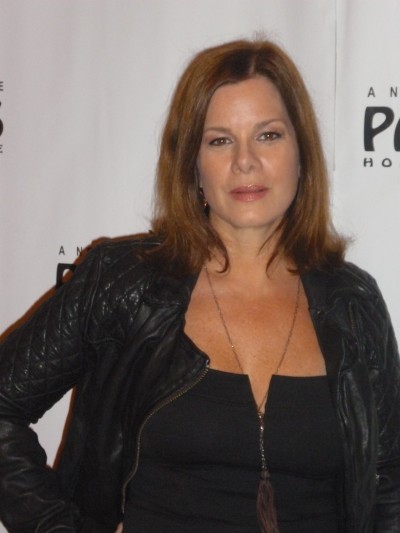 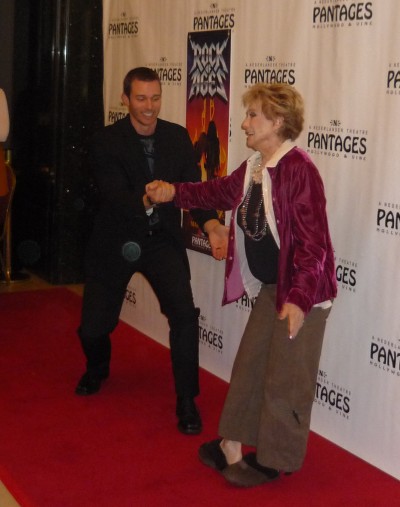 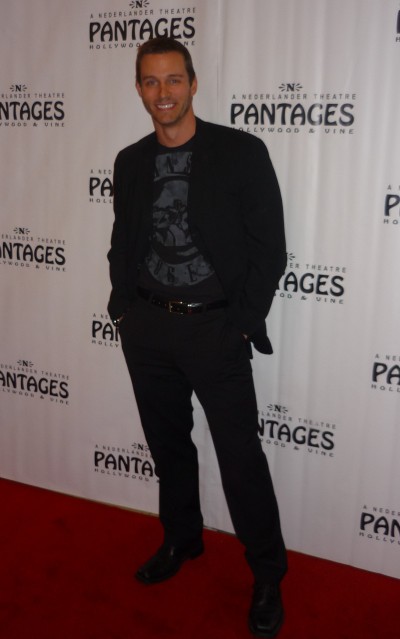 Wait a minute, was I at a performance of a Tony Award-nominated musical last night or at a rock concert?

Attended opening night of the one-week-only engagement of Rock of Ages at the Pantages Theater in Hollywood and had one heckuva great time.

The cast is just aces and it was so great to meet some of them before the show and have them pose for a group shot specifically for Greg In Hollywood readers. The tall blonde in the back is Matt Nolan who plays Stacee Jaxx in this national touring production. Tom Cruise takes on the role in the upcoming movie version and I asked Matt who is better. He indicated that he is – because he’s taller!

What a gifted group and what an energetic show they put on with songs from Journey, Styx, REO Speedwagon, Foreigner, Pat Benatar, Whitesnake and more.

There were band members from Foreigner and Whitesnake in the audience last night.

I snapped these photos and did some interviews with some of the celebs but couldn’t manage to get in a word with Miss Leachman who was too busy clowning around with Martsolf on the red carpet. What a hoot!!

I just had to know what Grieco (pictured, left) thought of the movie version of 21 Jump Street starring Channing Tatum and Jonah Hill which finished atop the box office over the weekend.

‘I did see it,’ he said. ‘It’s a funny movie. I think Jonah and Channing did a great job and I was really pleasantly surprised, I really was.’

What a treat it was to see the talented Marcia Gay Harden who won an Oscar for Pollock , was nominated again for Mystic River and won a Tony Award for God of Carnage.

She really is one of the great actresses of her generation and elevates anything that she is in.

‘When this show opened in New York, we were doing God of Carnage down the street and we knew a lot of people in it. But we didn’t get to see them,” Marcia told me. “I know it’s an exciting show so we thought we thought we’d come out here for the opening.’

When Martsolf arrived, he was immediately greeted by two members of the band Foreigner who were in the red carpet just ahead of them. He posed for so many photos with them that I assumed they were old friends.

He told me the real story.

“Turns out that Foreigner’s base player, his wife is a devoted fan of Days of Our Lives. So basically you have a guy – me – who has listened to Foreigner throughout his childhood. I just met them and I’m blown away.”

“My best friend in the world had bought me tickets to see them at the Hollywood Bowl for my 40th birthday and now I’m on the carpet with them and they’re like, ‘Can we get a picture with you?’ Freaked me out. It’s literally one of those moments that you just love.”

Okay, a little about the show. It is set in 1987 on the Sunset Strip and a small town girl meets a big city dreamer at the legendary rock club in LA where they both work. They fall in love to some of the greatest songs from the 80s.

It is just non-stop music and fun. I sang Foreigner’s Don’t Stop Believin all the way way home!

One funny thing did happen. My friend Mark and I had terrific orchestra seats and were seated next to a couple who I would guess to be in their 80s. The show starts off with an energetic rock number – very loud – and midway through that first number, the man was fast asleep and he appeared to sleep much through the entire first half.

We chatted with them at intermission but didn’t have the heart to tell him we caught him napping!